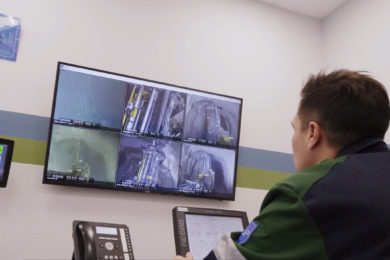 Epiroc’s advanced automation solutions for remote underground drilling, including Simba Teleremote, ABC Total and the Certiq telematics system were implemented, in 2018, at Apatit JSC’s Kirovsk branch (PhosAgro group). Through the automated solutions, several risks in operators’ jobs were eliminated, output of the drilling machines grew by 20% and the utilisation of one machine increased to 95%.

“As the scope of drilling at the mine increases every year, our company has searched for ways to increase productivity, reduce costs and improve work quality. Additionally, we have set a goal to maximise safety levels for drilling machine operators, who have always faced severe working conditions. To achieve this, we decided to move towards automation of the entire drilling process, including the adoption of digital drilling datasheets. Only Epiroc has been able to offer an integrated solution which meets our requirements,” says Andrei Abrashitov, Director Apatit JSC Kirovsk branch.

In 2018, Apatit installed Epiroc’s Teleremote options on three Simba production drill rigs, as well as ABC Total and Certiq telematics system for remote control and monitoring of the drilling units at the Kirovsk branch. During the pilot project, a special rig control station was allocated on the surface.

The smart features and the automated platform have been enabled by 6th Sense, the Epiroc way to optimise its customers’ value chain through automation, system integration and information management. With 6th Sense comes system connectivity, using interoperability to unlock the full potential of automation for production gains at lower operating costs.

Traditionally, underground production drilling has been performed with special equipment controlled by operators underground at each rig. With the Epiroc solution, the operation of several production drill rigs is controlled by one operator from the above ground control room along with one drill runner underground. The control room operator manages the process with the help of video cameras mounted on the Simba drill rigs. Integrated sensors on the rigs send data to the control dashboard, allowing the operator to monitor performance and status in real time.

“Instead of one machine, the operator now controls six drilling rigs at once from a control station. And starting from October 1st, the second operator, who is located in the same control station, takes control of four additional drilling rigs. Today, this is the world’s largest teleremote project for production drill rigs” shares Artyom Yakovlev, Head of production excellence department at Apatit JSC Kirovsk branch.

In addition to the safe working conditions for operators, another advantage of the Epiroc solution is that there is no longer a need to stop the drilling process to remove personnel for ventilation after blasting. Apatit estimates that the implementation of Simba Teleremote has increased the drilling units’ productivity by 20%.

Apatit’s Kirovsk branch also implemented Epiroc’s telematic system Certiq to gather, analyse and communicate vital equipment data from the drilling units. With this system, machine utilisation data is closely monitored and results for one rig holds values up to 95% and more.

“Epiroc’s ABC Total system is another important part of the remote control system. Currently, Apatit is testing remote transmission of drilling plans from the geological and mining information system directly to one of the Simba drill rigs. Thus, an unprecedented level of automation is achieved, improving drilling accuracy and minimising possible human errors. Apatit is able to perform automatic drilling of both a single drill hole and an entire ring without operator intervention.”

“Safety, reliability, and high productivity are the most important components of the new solution, which we have implemented in our work jointly with the Epiroc team,” says Andrei Abrashitov, Director Apatit JSC Kirovsk branch, summing up the branch managers’ opinions.

“The Epiroc and Apatit teams collaborated professionally and skillfully, resulting in the successful completion of the trial project. Based on this trial, we are currently further developing the use of the Epiroc technology in our company,” emphasises Sergei Alexandrovich Cherkasov, IT Director Apatit.

Apatit has decided to further outfit their Simba drill rig fleet, and is now considering to equip its second underground mine of Apatit JSC Kirovsk branch, Rasvumchorrsky with teleremote drilling.