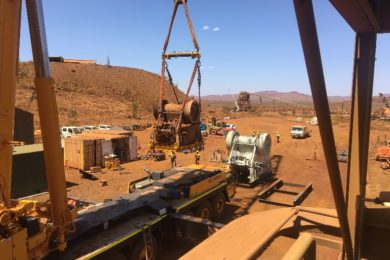 Minprovise says it has completed a jaw crusher replacement project at Rio Tinto and Hancock Prospecting’s jointly owned Hope Downs 1 iron ore mine site in the Pilbara of Western Australia.

The crusher in question, a Metso Nordberg C160, is Hope Downs’ primary crusher. Minprovise was selected for this project due to the positive references it has previously received carrying out similar work in the field, the mineral processing equipment and site services provider said.

The crusher replacement was the second such project completed in the last year by Minprovise, the first being undertaken at the West Angelas mine site (part of the Rio-majority owned Robe River joint venture), located in Newman, in late 2018.

“The large-scale site maintenance project required careful quality control and site safety management in the lead up to, and during, the crusher replacement,” Minprovise said. The team were required to safely and efficiently remove the old jaw crusher model and replace it with the newer C160 model in its already established and confined structure, according to the company.

“Minprovise’s end-to-end business model and internal manufacture and fabrication capabilities meant that the team were also able to fabricate the appropriate and tailormade transport frames, jigs and chute covers for the optimised safety of the project,” it said.

To complete the lift, the company used a 500 t crane to safely manoeuvre the 78 t crusher mainframe into place.

As the sole provider of the install process, Minprovise was required to coordinate between the client, the transport agency, the crane provider and the crusher manufacturer to ensure a smooth and time efficient process, it said. “Minprovise’s phase of the replacement project was completed in the originally quoted and designated amount of time, with no hiccups or costly time-delays.”

Throughout the entire process – which included concrete cutting and jackhammering of the support base, removal and replacement of the casting plates, re-grouting of the new base and plates and heavy lift and install of the crusher – zero safety incidents or minor injuries were reported, according to the company.