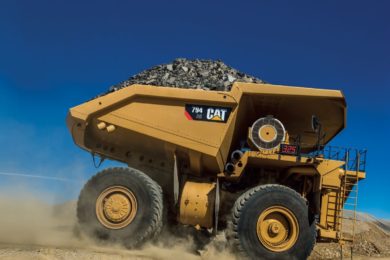 At a briefing today in Lima, Peru, Tom McCulley, Anglo American CEO in the country told IM Editorial Director Paul Moore that the Caterpillar 291 t 794AC truck fleet supplied by dealer Ferreyros for the 127,500 t/d Quellaveco copper mine will operate autonomously using Command for hauling with a staged introduction.

Prestripping is about to start in the next few weeks using a smaller contractor fleet, before the main fleet phases in next year – initially seven trucks will run automated in the South pit with the North pit operated manually. Anglo also says it will be deploying autonomous blasthole drills at Quellaveco and the group already has experience and success of using autonomous drills at the Kolomela iron ore mine in South Africa.

The autonomous ramp up will see the full fleet of 30 trucks automated by October 2022. After the autonomous fleet plan at Dawson coal mine was put on the back burner in favour of overhauling the existing fleet of 23 Cat 797 trucks, the Quellaveco fleet will be Anglo’s first major autonomous fleet. The company does also have some historical experience having worked with ASI Mining using autonomous Komatsu and Volvo ADTs back in 2011 in South Africa.

In terms of the rest of the fleet, the autonomous trucks will be loaded with Cat 7495 electric rope shovels, the largest equipment in the Caterpillar portfolio. In addition, the mine will also operate a Caterpillar 6060 hydraulic mining shovel, the first of its kind in Peru. This 6060 will be one of the latest models with the latest technologies applied and mainly all Caterpillar components. The 6060 name as opposed to 6060B and dropping the letter is part of the Cat nomenclature for the newest version of this machine.