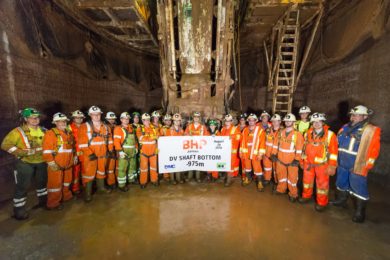 While uncertainty remains around the construction of BHP’s Jansen potash project in Saskatchewan, Canada, the company, in its September quarter results, confirmed it is still spending money on the asset prior to making a development decision.

BHP said the Jansen Stage 1 potash project will be presented to the board for a final investment decision by February 2021. The currently Stage 1 plan, which is in the feasibility study stage, involves building out initial capacity of 4.3-4.5 Mt/y of potash, with expansion optionality.

The miner has, so far, committed to spending $2.7 billion on the project. This is expected to result in the excavation and lining of the 7.3 m diameter production (975 m deep) and service (1,005 m deep, pictured) shafts – sunk by DMC Mining using Herrenknecht’s Shaft Boring Roadheader – and the installation of essential surface infrastructure and utilities. The overall Stage 1 project is expected to have a capital outlay of $5.3-5.7 billion.

In the September quarter results, BHP said in order to make a final investment decision, work on engineering to support project planning and on finalising the port solution is required. The BHP Board has, as a result, approved $144 million of spending for these activities, with an additional $201 million in funding set aside to further de-risk the project. The latter is focused on the mine’s scope of work, advancing other engineering and procurement activities, and preparation works for underground infrastructure, it said.

“This will enable an efficient transition of the project team between the study and execution phase, should the project be approved,” BHP said, adding that the release of funding to the project will be staged over this period.

The company, meanwhile, gave an update on its South Flank iron ore development, in the Pilbara of Western Australia, with CEO Andrew Mackenzie saying the project was 50% complete, with all major items on schedule and budget.

South Flank, which is expected to cost $4.6 billion to build, is set to replace production from the existing Yandi mine, which is reaching the end of its economic life. BHP is targeting first ore extraction at the operation in 2021 and expects to ramp up to 80 Mt/y of output.