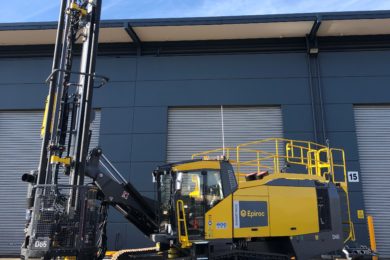 Across mining, new advanced and innovative machinery is appearing, and in many cases the OEMs have opted to enhance performance and efficiency by upgrading already very popular models and platforms. Earlier this year, Epiroc launched its new SmartROC D65 surface drill rig, which is the next generation of this model and has now been fully future proofed and is automation ready.

Australia is the first big target market, and IM’s Paul Moore spoke to Epiroc’s Kris Thomas, Product Manager – SED at Epiroc Australia, about the first units that are set to be commercially deployed to minesites, which recently arrived in the country from the factory in Orebro, Sweden. Three units are currently at the Epiroc workshop in Perth, WA being adapted to the national Australian safety standards. The model was also due to be shown at a special customer event in October 2019, where miners and contractors will get the chance to see the new machine up close at a quarry and take in its range of enhancements.

Already the new model has seen a lot of interest in Australia as it is by far the most advanced model now available in this size class (mainly used for pit edge contour drilling as well as presplitting and some production drilling) and replaces the “standard” SmartROC D65 that will now be discontinued though of course this older fleet will continue to be supported, and there are hundreds still operating. The new model has already been put forward in several major tenders, particularly in the WA iron ore industry.

Thomas told IM: “The SmartROC D65 platform is already in use throughout Australia but this new model is a game changer as with its RCS platform it now links with other automation ready models in the Epiroc line up such as our Pit Viper machines as well as other remotely operated equipment. It also replicates the popular cab design on other newer drill models, but beyond this it is a true smart drill. Fuel saving is a big focus thanks to intelligent compressor – more efficient in air delivery, and better engine control. Because of its intelligent systems and less hydraulic hosing, it also needs far less hydraulic fluid on board – only 100 litres capacity instead of the predecessor model’s 400 litres. So it is also more environmentally friendly, and sustainability is a big target across the industry.”

The model allows users to do much more for the same class of drill. The efficient air delivery allows use of larger hammer sizes – maximum of 229 mm instead of 200 mm; meaning it begins to encroach on large blasthole drill capability, meaning it could work out a less costly option for smaller mines and contractors. It can also act as a back up or enhancement to fleets of larger drills. There is also the option of using 8 m instead of 6 m drill rods, though Thomas was keen to stress that 6 m remains the norm for many operations, and the conversion only involves a simple configuration change so there is a lot of flexibility there.

Epiroc says it has the intelligence and power to consistently and efficiently drill high-quality blast holes with accuracy and precision, and is loaded with smart features such as automated drilling and rod handling. The automation-ready platform also includes the new Auto Feed Fold feature. With the press of a button, Auto Feed Fold enables the operator to fold the feed for tramming or position it for drilling.

In detail, the SmartROC D65 is available in three different feed beam sizes to carry 5, 6 or 8 m pipes, and has the capacity to drill down to a depth of 56 m. When using 8 m pipes, it is possible to drill 16 m production holes with just one rod addition. As stated the added power of the COP M7 hammer enables the SmartROC D65 to drill holes up to 9 in (110 to 229 mm) in diameter.

Thanks to intelligent control of compressor load and engine rpm, the SmartROC D65 not only helps to optimise the blasting process with improved fragmentation. It also cuts an already low fuel consumption by a further 20% compared to the same size FlexiROC rig model. In addition, the rig offers multifunction joysticks and adjustable-speed tramming to further improve operator comfort and make trailer loading safer and easier.

The image was taken at the Epiroc Customer Centre yard in Perth, Western Australia