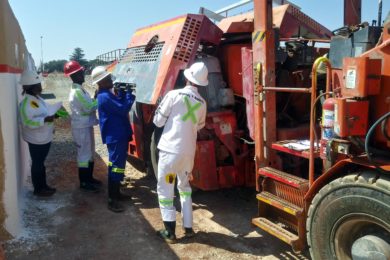 Further enhancements at the Murray & Roberts Training Academy (MRTA) training facility, Bentley Park, in South Africa, are keeping the organisation at the top of its game in mining skills development, the company says.

The training infrastructure, near Carletonville in Gauteng, is constantly adding to its resources as the demand requires, according to Tony Pretorius, Education, Training and Development Executive at Murray & Roberts Cementation.

“Among our new facilities is an indexing wall on which drill rig operators can be trained to drill on a horizontal plane,” says Pretorius. “We are also constructing a new tunnel with a face wall on surface to teach miners how to take line and grade and accurately mark off a development end with laser technology.”

He highlighted the value of the MRTA’s ‘blended learning’ approach, which makes the learning process more effective by including not just classroom lectures but also e-learning, virtual reality, bench modelling, simulations and integrated learning in a workplace mock-up.

The facility prepares trainees mainly for the hard-rock underground mining environment, in which Murray & Roberts Cementation is a leading contractor.

Other recently developed mock-up facilities at the site include a board-and-pillar layout constructed on surface, to facilitate practical, supervised training for most primary and secondary trackless activities, and a figure-of-eight surface roadway for LHD driver training, complete with brake-test slopes. The fleet of trackless vehicles used for training at MRTA includes LHDs, a drill rig, a bolter, a telescopic boom handler, a mechanical scaler and a mechanised shotcreting unit.

“The quality of our skills output – combined with the ongoing demand for entry-level skills by Murray & Roberts Cementation’s mining projects around the country – allow us to turn training into jobs,” Pretorius says. “In fact, we are creating hundreds of career opportunities for unemployed youth from communities near our operations.”

With grant-funding from the Mining Qualifications Authority, MRTA will this year train 176 young jobless learners in basic mining-related skills, according to the company. Those who successfully complete the six-month program will earn a Level 2 National Certificate in Health, Safety and Environment for Mining and Minerals. Most trainees – of which half are women – are taken up by Murray & Roberts Cementation’s contract mining operations, to begin exciting careers in the mining industry, the company said.