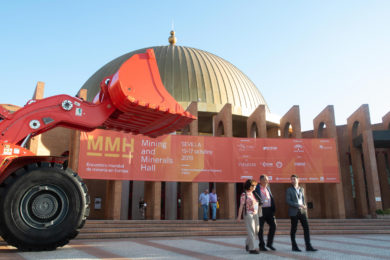 The organisers of the International Mining Hall (MMH) event in Seville, Spain, have heralded a successful third edition which more than 10,000 people visited

MMH came to an end on October 17 with a closing expert panel about the future of mining and an award ceremony where important personalities of the sector were honoured.

The Seville Conference and Exhibition Hall (FIBES) and the Association of Research, Extraction, Mining-Metallurgic Transformation and Service Companies (Aminer) broke their own records both for visitors and attendants, organisers said.

Apart from the scientific programme, which featured 70 speakers, MMH saw 100 business-to-business encounters. As well, 20 Andalusian companies of the mining sector held 120 business meetings with nine agents from four counties to present their products and services in the framework of a reverse trade mission organised by the Regional Department of Presidency, Public Administration and Home Affairs through Extenda, Andalusian Agency for Foreign Trade Promotion as part of the side activities, they said.

The III Mining Hall showed its international scope by drawing the interest of attendants from 20 different countries, as well as regional, national and international media, organisers said.

As in previous editions, MMH paid tribute to professionals with extensive careers in the mining sector. This time, the event honoured Dolores Norte, Alberto Lavandeira and Juan José Cerezuela.

Dolores Norte became the first woman Mining Engineer in Spain back in 1974 and, has since, developed a long professional as well as academic career.

She held different management positions at Technicas Reunidas SA, in addition to having been secretary of the Governing Board of the Colegio de Ingenieros de Minas del Centro (Mining Engineering Association of Central Spain) and a member of the Quality Committee of the Instituto de la Ingeniería de España (Spanish Engineering Institute).

Alberto Lavandeira, CEO of Atalaya Mining since 2014, boasts more than 38 years’ experience in the sector at national and international level. After graduating at Oviedo Mining School, he worked in the Spanish subsidiaries of Rio Tinto, Anglo American and Cominco. Later he managed Rio Narcea Gold Mines, starting up Aguablanca (nickel), El Valle-Boinás (gold).

He then led the project of Mutanda Mine (copper and cobalt) in the DRC, with the company Sanref Overseas SA.

As for Juan José Cerezuela, he is a Mining Engineer, with wide experience in mining, energy and management. Among the many responsibilities he has held throughout his career are Dirección General de Minas (Mining General Direction) (1986), Presidency of FIPAE, SUSCHEM (2009) and Presidency of CONFENDEM.