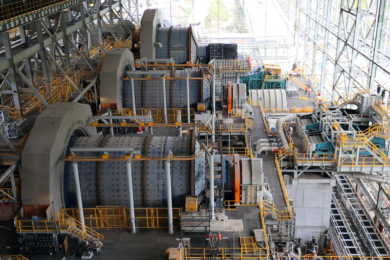 Cobre Panama, which spans 13,600 hectares, is located 120 km west of Panama City in the Donoso district, Colon province and 20 km from the Caribbean Sea coast. The first project of its kind in Panama, Cobre Panama has significant copper deposits that are expected to be explored over the next 30 to 40 years and is forecast to contribute up to 5% of Panama’s gross domestic product (GDP). The Panamanian company that holds the Cobre Panama concession, Mineria Panama SA (MPSA), was incorporated under the laws of the Republic of Panama in January 1997.  Following a period of ownership transition, First Quantum Minerals, a well-established and growing metals and mining company, increased its ownership of Cobre Panama to 90% in November 2017.

The six ABB Gearless Mill Drives, which are the most powerful mill drive systems on the market for semi-autogenous (SAG), ball and autogenous mills, have been installed since late last year and are all now in continuous operation.  Two 28 MW gearless mill drive systems (GMDs) are operating in the company’s 40 ft SAG mills and four 16.5 MW GMDS are employed in 26 football mills along with associated control systems.

“Gearless mill drives are the ‘workhorses’ for grinding operations which are at the heart of any mine. The six ABB GMDs at the world class Panama Cobre project are extremely robust given demanding ambient conditions.  As the ore extraction pace indicates they are maximising throughput,” said Rene Chacon, Project Manager at ABB for Cobre Panama. “They allow operators to react to changes in ore characteristics due to variable speed and, by optimising the process, are more efficient in their use of grinding power.”

ABB Gearless Mill Drives such as those at Cobre Panama can operate under the most extreme environmental conditions like high altitudes or varied climates in remote locations. Due to their optimised design, they maximise reliability and availability of grinding mills.