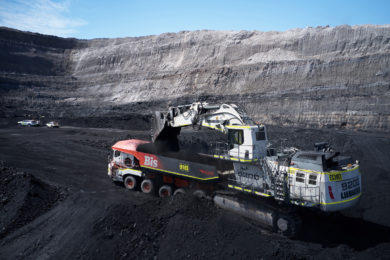 The revolutionary mine haul truck Rexx has been working on a new commodity as it continues to prove its versatility in different mining conditions.

Designed and developed by leading provider of specialised production services Bis, the dual powered 20-wheel dump truck is working at the Ewington mine operated by Griffin Coal in Western Australia’s Collie Basin.

Bis CEO Brad Rogers said the standout performance to date of the first Rexx unit at nickel and gold operations, as well as supportive feedback from customers, had encouraged the company to commit to construct Rexx Two.

Rogers said the second haul truck would be deployed in early 2020 as part of the Bis fleet servicing a customer on the east coast of Australia.

“We have been absolutely rapt with the performance of Rexx. It continues to tick the boxes that it was specifically designed for including range, fuel efficiency, manoeuvrability and conquering gradients. We look forward to our second Rexx truck starting work on the east coast in the near future,” Rogers said.

“We are very proud that the initial design has proven to be on the money. We are also finalising several Rexx opportunities for miners in Australia and Indonesia, which will start to fill the manufacturing pipeline.”

The three-month Rexx trial at the Griffin operations will provide the chance to demonstrate the vehicle’s efficiency and capacity in a different mining environment, carrying a new ore type.

“Different commodities have different characteristics and each mine has its own context in terms of conditions or layout,” Rogers said. “Rexx was designed to accommodate a range of interchangeable bins to suit different commodities, as well as loading tools and tipping situations.”

A Griffin Coal representative said that the team are excited at having Rexx on site and the initial feedback across site has been positive. “We are excited at continuing operational activity with Rexx over the coming weeks and seeing the progress and outputs that follow.”

Rogers said Rexx was a tangible example of the culture of customer driven innovation which flowed through Bis.

“We look at the needs of our customers, the specific challenges they face and then develop solutions. Rexx was born out of the need to evolve in pit haulage with a sharp focus on agility, range and cost effectiveness,” he said.