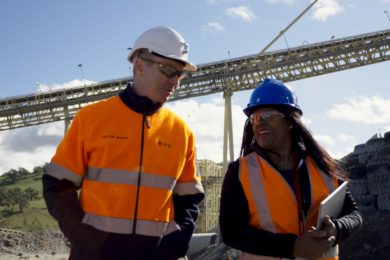 Newcrest Mining has deployed Microsoft cloud, AI and IoT technologies at Australia’s largest underground, block cave mine to monitor and manage crushed ore bin levels. The soft sensor delivered a return in investment within the first three months of operation. The technology, developed by Newcrest in association with Microsoft and its partner Insight Enterprises, has been rolled out at Newcrest’s Cadia Valley gold mine in NSW.

The challenge facing Newcrest at Cadia was managing the levels in the underground crushed ore bins. If the bins overfill, they have to be manually emptied introducing lengthy and expensive production delays. Conversely, if the level drops too low it is unable to effectively feed the collection conveyor. Newcrest had spotters, physically watching the bins to ensure they didn’t overfill as the hard sensor used previously was unreliable. According to Gary Slater, Digital and Data Science Architect at Newcrest; “The hard sensors in our crushed ore bins were failing at a rate of two or three times every month per crusher, and it often took hours to get the process up and running again. Over a period of six months, our Cadia Valley mine experienced 4,780 minutes of downtime due to sensor failure in one of the crushed ore bins, which equates to a significant dollar value in lost opportunity.”

Using Microsoft Azure, Newcrest and its partners created an Intelligent Edge solution that optimises the underground crushing circuit. The model pulls data from other upstream sensors: tonnes tipped, apron feeder speeds, weightometers, and so on. The model then analyses the data to predict the level of crushed ore in the bin and uses that information to control the flow of ore to the crusher, keeping the ore moving at an optimal level of productivity and preventing the bins from depleting or over filling.

“Having continuous, accurate information about the amount of ore in the crushed ore bin is a critical component of our operation,” said Slater. “If the level of ore in the bin drops too low, then too little ore is being fed onto the conveyor. If the bin gets too full, then we need to stop the crusher and empty the bin in what amounts to a manual process. By always knowing how much ore is in the bin, we can regulate the level to keep production high and avoid shutdowns.”

The Intelligent Edge approach has allowed Newcrest to automate bin monitoring and the solution is achieving 85% accuracy. As a result, Newcrest workers face fewer risks, and the AI-fueled predictive maintenance allows early intervention to keep production on track. According to Gavin Wood, CIO at Newcrest Mining, the solution is delivering; “Higher productivity, less downtime, more throughput. With Azure’s AI machine learning and IoT capabilities we see a future where our mines are automated – making our mines safer and more productive.”

Mining transformation is taking place globally. According to Transparency Market Research, the global smart-mining market is expected to grow from $6.80 billion in 2016 to $16.25 billion by 2025, at a compound annual growth rate of 10.2 per cent.

Working together, Insight, Microsoft and Newcrest created the smart-mining IoT solution which has global potential for the business. One of the world’s largest gold producers, Newcrest operates gold and copper mines in Australia, Indonesia, Papua New Guinea, and Canada many of which face challenges similar to those at Cadia Valley.

“Newcrest is a leading client of ours who has matured their data science initiatives through data-driven technologies on an Azure-based solution. We have been strategically working with Microsoft, Newcrest and their partners to help solve real mining challenges to drive operational improvements and worker safety. We are thrilled to continue supporting Newcrest in pursuing emerging technology solutions with Intelligent Edge, IoT and AI”, said Phil Rickson, Executive General Manager, Services APAC, Insight Enterprises.

The solution reduces operational downtime for Newcrest’s heavy assets, and also improves mineral recovery performance by pushing the computational AI models closer to the edge and connecting them to Newcrest’s control systems. Leveraging Azure Industrial IoT and Big Data Platform, Newcrest has implemented an open data science platform that ingests data feeds from 100,000 machinery sensors, and approximately 40 billion records, from across its international mine sites, through Azure IoT hub.

This is an important foundation for Newcrest as it seeks to pursue open data science initiatives internally and with its partner ecosystem. Steven Worrall, Managing Director, Microsoft Australia said; “This is a leading example of how Microsoft Azure, AI and our intelligent edge IoT technologies can transform a process in even the harshest environment. “Working with our partner Insight and with Newcrest, we have delivered a solution generating significant human and economic benefits. The global reach of Microsoft Azure also means that the investment Newcrest has made at its Cadia mine solution has the potential to be leveraged at its mines all over the world.”