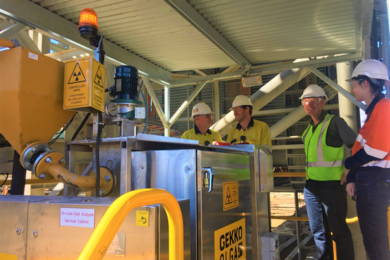 Gekko Systems says the benefits of accessing real-time on-stream gold data has been proven with the trial installation of the CSIRO-Gekko OLGA analyser at Evolution’s Mt Carlton operation, in Queensland, Australia.

This trial has since been converted into a sale and permanent installation, Gekko said.

OLGA is an X-ray fluorescence-based technology capable of detecting gold in slurry with around 1,000-times better accuracy than conventional methods – and in real time, according to CSIRO, which helped develop the analyser.

It detects gold (and other elements) contained in a continuous process stream at 10 parts per billion using a pair of X-ray lenses that greatly magnify the slurry’s fluorescent gold signal as it passes through a tank, CSIRO explained.

While the announcement of the trial and commercial transaction for Evolution’s Mt Carlton operation is ‘news’, CSIRO reported earlier this year that field trials at a Queensland gold mine were showing positive results and that the technology was expected to be ready for market this year.

Gekko, last week, said the unit was installed in December 2018 and trialled on a number of slurry streams including feed and tail before the device was purchased in June 2019. “Both CSIRO and Gekko teams worked collaboratively with a very engaged support group from Mt Carlton to deliver a quality outcome,” the company added.

The alpha system was designed for harsh mine conditions and exhibited high availabilities, according to Gekko. Furthermore, sampling accuracy has also been very positive when compared with assay test work on the same sample stream, the company added.

In reviewing the data, Professor Tim Napier-Munn, a Statistical Expert from JK Tech, said: “Based on these data and in this application, OLGA is likely to provide estimates of feed Au concentration that are suitable for use in manual or automatic control of the downstream process, and metallurgical balancing over time”

Mt Carlton was developed by Evolution and commissioned in 2013 and is now one of the highest-grade open-pit gold mines in the world, according to the miner. It produced more than 100,000 oz of gold for the third year in a row in the company’s 2019 financial year (106,646 oz), the same year in which the development of an underground mine from within the open pit was approved.

Last week, Gekko also announced the signing of a partnership and collaboration agreement with Western Australia-based specialist mineral processing engineers, Cadia Systems. The partnership was expected to feature a new Gekko-Cadia brand, which represented an important industry collaboration between Cadia’s engineering capabilities and technical knowledge in areas such as carbon desorption, regeneration and gold room systems and Gekko’s modular plant and package offerings, the two said.