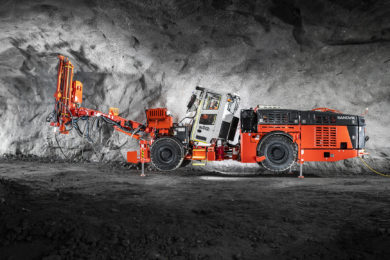 “The safe and efficient new Sandvik DS512i is equipped with the new FOPS/ROPS cabin as standard, providing a safe, comfortable working environment for the operator,” Sandvik said. “This reduces noise, vibration and dust levels and improves visibility while drilling and tramming.”

Furthermore, the operating environment has an interactive graphic user interface enabling all bolting operations to be performed by a single operator in safety and comfort, according to Sandvik.

The new DS512i also comes ready for the AutoMine® fleet and information management system and has multiple levels of automation, enabling the correct choice of rig for the specific application.

“High levels of drilling performance are ensured, thanks to the use of the Sandvik RD314 high frequency rock drill and the drilling control system which optimises drilling penetration rates,” the company said.

The one bolt automation function of the DS512i, meanwhile, provides improved drilling productivity and extends operating lifetime of the drilling tools.

Sandvik says: “The new DS512i provides the ultimate peace of mind in rock support. With up to 55% increased operator visibility and 35% higher penetration rates for greater productivity, performance and safety are seamlessly combined.”

An upgraded bolting head comes with different bolt lengths providing an extensive bolt selection, while the eight-rock bolt carousel ensures the DS512i is capable of installing different types of rock bolts ranging from 1.6 m (5’) to 6 m (20’) in length.

“Designed specifically for tunneling and mining, the DS512i has been developed based on a modularised concept leading to high levels of parts commonality with the Sandvik DT922i, enabling lower levels of total cost of ownership,” Sandvik said. “The bolter has been designed for the integration of subsequent actions involved in the drill & blast.”

As well as being the ideal bolter for tunneling, the new DS512i comes complete with features to make it the perfect choice for mining bolting operations, according to the company.

“It possesses several types of bolt length and varieties within the same machine and an automatic cement mixer in parallel with automatic resin injection,” Sandvik says.

”Ideal for small and large headings, it enables high bolting and meshing coverage, with efficient operations being ensured through sharing high commonality of parts with other members of the 400i carrier series.”

As well as the above performance features, the new DS512i is equipped with high levels of automation. These have been developed to suit the specific needs of the customers and come in two packages: Silver and Gold.

The Silver package comprises of ‘one bolt’ automation (collaring, drilling, grouting, bolt handling, tensioning) and hole angle measurement. The boom is fully instrumented with indicators for hole angles, tilt and rotation, as well as an advanced boom manipulator, automatic cement mixing and basic remote monitoring, among other features.

The Gold package has full instrumentation and fan bolt locations to show one or more bolt fans to the specific mine or tunnel coordinates. iSURE comes as standard along with MWD, Total Station Navigation, Tele-Remote bolting, ‘planned versus actual’ bolting (which can be transferred to the control system) and full remote monitoring.