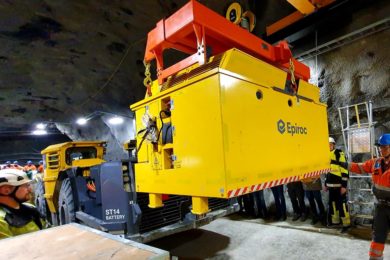 Agnico Eagle is likely to leverage more innovation at its Kittilä gold mine in northern Finland judging by André van Wageningen’s presentation at the FEM conference in Levi, this week.

In a talk titled, Building future mines through collaboration, van Wageningen, Engineering Manager of the Shaft project at Agnico Eagle Finland, said the company was testing out battery-electric equipment and could potentially apply LTE in the underground mine next year.

Much of the battery-electric machine testing the company is carrying out at the mine is in partnership with the EU-funded SIMS project, but van Wageningen said the company has also acquired two electric bolters outside of the program.

As recently as last week, Agnico tested out an Epiroc MT42 Minetruck and ST14 Scooptram at the mine (pictured), with van Wageningen saying the trials had, so far, gone well, with operators noticing less heat generation and vibrations, and better air quality within the operating environment.

“The battery capacity is of course the main concern,” he said in answer to an audience question about how the electrified equipment had so far performed. “Our mine is designed to drive up and…[the machines] have a limited capacity for [that].”

On the topic of collaboration, van Wageningen mentioned that if Agnico had decided on the use of battery-electric and electrified equipment four or five years ago, it would have likely deepened the shaft further and redesigned the mine to suit the reduced ventilation needs and required battery charging/changeout infrastructure.

“If you go for electrification, you either do it or you don’t as you have to build charging stations for this,” he said, adding that these need to be plotted around the mine in relevant locations to ensure the machines are as productive as possible.

van Wageningen said Agnico has raisebored down to 875 m, and the 94 m headframe was likely to be finalised in the very near future.

The deepening of Kittilä and the evolution towards using autonomous underground machinery is probably behind the company’s plans to leverage LTE communications at the operation.

Agnico is already a leader when it comes to LTE, having become the first company to roll out the communications technology at an underground mine – the La Ronde Zone 5 operation in Quebec, Canada. This move was predicated on Agnico trialling autonomous equipment underground at the mine. In its June quarte results, the company said results from these trials had produced “favourable” results.