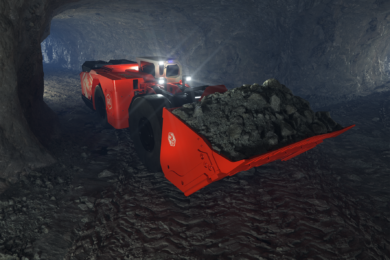 Sandvik has delivered two Artisan A10 battery-electric loaders to Kirkland Lake Gold’s Macassa mine in Canada. The Artisan A10 is a 10 t capacity loader with zero exhaust emissions, designed for underground hard rock mines. These are the first Artisan battery mining machines to have been announced as being delivered since Sandvik’s acquisition of Artisan Vehicle Systems.

“The Artisan A10 is the most capable loader in its size class; its carry capacity of 10 t has been achieved while keeping its outer dimensions equal to current 7 t diesel loaders. The equipment is not constrained by mine ventilation limitations, as the Artisan A10 uses the most powerful electric motors available and a patented lithium-iron phosphate battery system. Use of Artisan Vehicle’s proven battery system instead of traditional diesel engines is connected with health and environmental benefits, as the loader produces less heat and zero exhaust emissions, reducing CO2 foot print. Further, packed with innovative design, the Artisan A10 delivers shorter cycle times through higher acceleration and faster ramp speeds, while utilizing regenerative braking to capture energy to recharge the battery.”

The Artisan A10 is equipped with a unique battery self-swapping system, speeding up time required for battery change, reducing infrastructure requirements and most importantly, improving safety. “Our self-swapping system has been performing well in our pre-delivery tests, including its ability to safely reduce the time required for battery change, which will increase the equipment overall availability for productive work”, says Joe Giraldi, Business Development Manager for Artisan Vehicles. “In general, the thinking behind Artisan Vehicles ground up design is actually quite simple. Through our experience we have realized that in order to truly capitalise on this technology, it is not about replacing some components, nor redesigning some parts of the equipment, but you must rethink the entire machine and design it around the technology as opposed to trying to fit it in an existing product’, Giraldi continues.

The Artisan A10 loaders in question have been extensively tested at Artisan Vehicle’s local facilities in California before taking them underground to actual production work at the Kirkland Lake Gold Macassa mine in Canada. The Artisan A10 units will be taken into production use during fall 2019.