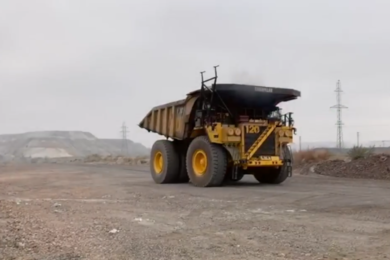 These are exciting times for mining equipment automation – the latest to enter the fray is iron ore major Ferrexpo which has announced a trial project for automated mining trucks at its Ferrexpo Yeristovo Mine (FYM) in Ukraine, thought to be the first in Europe for non-prototype, large payload trucks and also one of the first in the former CIS.

An initial test on a driverless truck was successfully completed on 21 October 2019. As part of the group’s continued drive to invest in its world class mining operation, Ferrexpo is working with ASI Mining to convert 15 of FYM’s existing haul trucks into autonomous trucks. “The deployment of an autonomous mining fleet will deliver significant safety benefits to our employees, especially with the elimination of accidents due to fatigue. The improved safety benefits will also be complemented by expected improvements in productivity.”

FYM operates both Caterpillar 789C and 793D haul trucks for iron ore and overburden haulage respectively. The truck that has been tested without an operator is a 793D model.

“This project is one of the first major autonomous haulage deployments in Eastern Europe. It represents a major milestone for the accessibility of automation at sites across the world,” said Patrick Hald, General Manager, ASI Mining. “Autonomous mining is no longer a luxury available only to the largest mines.”

Alexander Tubaltsev, Chief Miner at Ferrexpo Yeristovo Mining, said “We selected ASI Mining because it is one of the world’s leading providers of robotics and automation and has already completed a significant number of successful deployments with major corporations in the mining and automotive industries. Ferrexpo is very proud to be the first to lead this initiative, not only in Ukraine, but also as the first open pit mine in Europe to do so.”

FYM anticipates the autonomous mining fleet will deliver significant safety benefits to employees, particularly by eliminating fatigue-induced accidents. The improved safety benefits will also be complemented by expected improvements in productivity and better control over the quality of the company’s ore mix.

ASI’s Mobius® Haulage A.I. will be a key component in the implementation and operation of the project. Mobius leverages advanced multi-vehicle command and control software to set up and manage a coordinated system of haul trucks. The Mobius Haulage Platform manages autonomous traffic, coordinates manned or unmanned vehicles and regulates the haul cycle in the most efficient way possible. By employing Mobius software at the Yeristovo mine, Ferrexpo anticipates improvements in utilization, along with increased safety and productivity gains.

Ferrexpo has also successfully completed the first phase of its autonomy drill rig project, working with Epiroc to remotely operate drill rigs at FYM from the group’s mine control room. In April 2019, an Epiroc Pit Viper 275 was commissioned while a second autonomous drill rig became operational in September. A third rig will be converted in December 2019 with the group’s aim to progressively convert all of the group’s Pit Viper rigs into autonomous drills. The project is expected to improve safety conditions and to increase the efficiency of drilling operations. It is anticipated that one operator will be able to manage three drills once the project is completed.