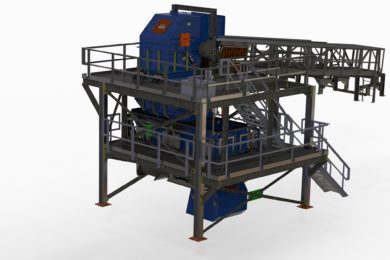 When bottlenecks were preventing one of the world’s deepest gold mines from achieving its targeted throughput on a level 2,850 m below surface, Weba Chute Systems designed and manufactured a solution. A short slew conveyor was at the centre of the South African mine’s challenge, providing the only source of ore from that level. Frequent stoppages from belt cuts on this conveyor – often from large rocks stuck in the bottom of the existing chute – meant costly downtime and disrupted material flow to the plant.

The solution, according to, Dewald Tintinger, technical manager at Weba Chute Systems, was to design a completely new chute solution that would remove the need for the slew conveyor arrangement. “The chute we designed has a bypass leg that drops waste material directly into the bypass, while allowing an inline channel of reef onto the conveyor belt,” Tintinger says. The custom-designed chute was able to replace the mechanical moving component, which also improved the safety of the working area.

The solution, which also involved 70 m of conveyor belt extension, required the new chute to bifurcate the flow of material from the stopes into a reef stream and a waste stream. “We achieved that by installing a chute section mounted on a trolley frame, actuated to split the material flow as required,” Tintinger says. Another benefit was that the area no longer needed regular cleaning. Previously, four shifts of cleaners – comprising four workers each – were required to service the area around the slew conveyor and remove spillage.

Weba Chute Systems Technical Advisor Alec Bond says the belt on the slew conveyor was also being regularly damaged by the high direct impact of rocks falling from the previous chute. “Our flow-controlled chute design ensures that the Weba chute has no free-dropping material,” he says. “Instead, the speed of the material is controlled all the way through, right up until the outlet onto the belt.”

The free-falling material was also causing regular damage to the chute itself, requiring frequent liner changeouts. By contrast, the Weba chute requires little maintenance. After a year and a half of operation, the mine has not had to replace any of the parts. Bond highlights how the underground location of the project added considerably to its complexity. Space at the point of installation was limited, with irregular angles and levels being imposed by the sidewalls and hanging wall. There were also constraints regarding the size of components that could be transported underground, either inside or hanging from the lift cage.

“Every component had to be designed with logistics in mind,” Tintinger says. He highlighted the advantage of Weba’s custom-design capability and ISO 9001:2008 accredited local manufacturing facility, combined with in-house expertise and years of materials handling and transfer point experience.

Installation of the new system had to be conducted with minimal impact on mine operations. It was therefore installed in stages while the plant was operational, according to Tintinger. The shutdown of the plant took place over the Christmas period, as this was the only time available that would not disrupt production.

“This required us to design the chute and associated structures in such a way that we could build it underground while the plant was running,” he says. Construction took place over a six month period alongside the operation of the slew conveyor. At the commencement of the Christmas shutdown, the changeover was done and the previous conveyor arrangement removed,” Bond says. “No production was lost during the installation of the new Weba chute and system.”