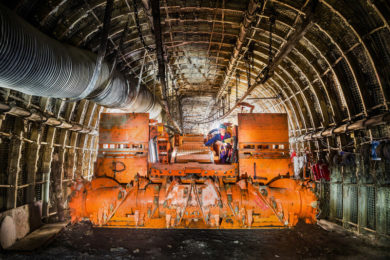 JSW, this week, started operating its Bolter Miner 12CM30 at the Budryk coal mine, in Ornontowice, Poland, one of the deepest hard coal mines in the world.

The first bolter miner of its kind in the Polish mining industry, according to JSW, the Bolter Miner was developed by a consortium including  JSW Innowacje, JSW, the Central Mining Institute and Komatsu Mining (Joy Global).

Last year, the system successfully passed all the start-up tests and, in September, the machine was handed over to JSW. On November 12, it started drilling the “Bw –1N badawczy” exploration roadway in seam 401 at the underground mine.

Adam Domżoł, Head of Mining at the Budryk mine and Coordinator of the ‘Independent Rockbolt Support’ project, said: “We have before us nearly 2,000 m of excavation and bolting of the new roadway using the new technology and new machinery. After the research and development stage is completed, the complex will allow us to achieve a much greater progress in roadway excavation than any solutions that were previously used in the Polish mining sector.”

The Bolter Miner was purchased by JSW Innowacje, a subsidiary of Jastrzębska Spółka Węglowa, in 2018 as part of the ‘Independent Rockbolt Support’ project. The miner was manufactured in the US and arrived in Poland in early August 2019.

According to the manufacturer, the maximum speed of work is 27 t/min of excavated material, which translates into lower cost advances, according to JSW.

Tomasz Śledź, Vice-President of the JSW Management Board for Technical Matters, said: “The rockbolting technology has been widely used globally: in Australia, South Africa, Russia and in the Czech Republic. It is much cheaper than frame supports and equally as safe.

“The cost of preparatory works in the mines of Jastrzębska Spółka Węglowa represents a significant portion of coal mining costs, so the company is seeking more efficient solutions. The use of rockbolting is an opportunity to reduce our expenditures incurred in the mining preparation process.”