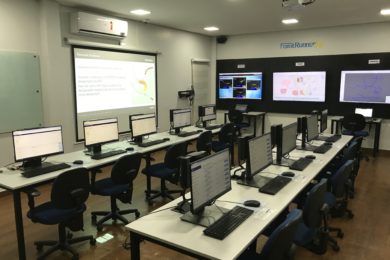 Komatsu says it has won a contract that could see it deploy up to 37 930E ultra-class electrical dump trucks as part of an Autonomous Haulage System (AHS) at Vale’s Carajás iron mine, in Pará, Brazil.

The mining OEM says the deployment will help support Vale in its drive to leverage technology to reduce the impact on the environment and enhance health, safety and operational efficiency.

The news follows Vale, last month, announcing it would start trialling autonomous haulage at Carajás, following a successful deployment at its Brucutu iron ore mine in Minas Gerais. This would see the company run both autonomous and manned trucks at the operation, the world’s largest open-pit iron ore mine, the miner said.

Powered by Komatsu’s AHS FrontRunner technology, the initial deployment is expected to start this month, according to Komatsu, with the goal of operating 37 trucks autonomously by 2024.

To support the company’s transition to autonomy, Komatsu opened an AHS training centre (pictured) near the mine in August, which “provides operations and maintenance training to upskill local people on the new technologies being introduced at the mine, in support of human resource development”, Komatsu said.

Masayuki Moriyama, President of Komatsu’s Mining Business Division, said: “We are honoured to be part of the ongoing wave of technological innovation at Carajás, supporting Vale’s commitment to sustainability and helping make the mine a reference in environmental terms. We look forward to our continued work together to support the skill growth of local workers and ensure a successful deployment that is designed to increase the safety and productivity of this operation.”

With this latest deployment, Komatsu continues to expand its AHS business in South America. Komatsu says its customers, globally, are now leveraging AHS at 10 mine sites in four countries.