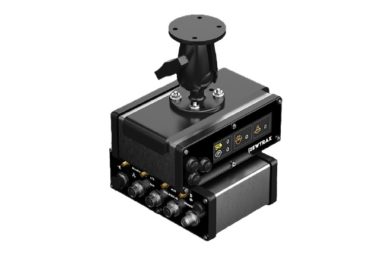 Newtrax Technologies says its New Vehicle Device, or ‘NVD’, is its most “powerful device yet, providing underground hard-rock mines with proximity detection, positioning, and communications capabilities in one box”.

The NVD, launched at the Sandvik Digitalization in Mining event, in Brisbane, Australia, this week, is both OEM and network agnostic, according to Newtrax, and includes peripherals such as sensors and control interfaces to enable EMERST CAS (collision avoidance solution) level nine (9).

L9 will help establish technologies that automatically intervene and take some form of machine control to prevent or mitigate an unsafe interaction, according to Newtrax.

Alexandre Cervinka, President & CEO of Newtrax, said: “Proximity detection devices must be designed to work without any network infrastructure. We maintain this critical feature and enhance the new generation of vehicle devices with positioning and remote communication capabilities, to enable near-miss heat maps, operator behaviour monitoring and remote firmware upgrades.”

In April of this year, Newtrax was acquired by Sandvik to be run as an independent business unit within the division Rock Drills and Technologies in the business area Sandvik Mining and Rock Technology.