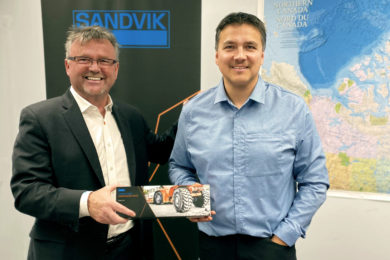 Sandvik Mining and Rock Technology has made Northern Networks Ltd its new distribution partner for equipment and aftermarket solutions in Nunavut, Canada.

Northern Networks Ltd is an Arviat, Nunavut-based, majority Inuit-owned distributor with operations in Rankin Inlet, and specialises in contracting, procurement, and strategic partnerships. The company is a part of the Eskimo Point Lumber Supply group of companies, which was named one of Canada’s 500 fastest growing companies in 2018.

Northern Networks has been operating and generating employment opportunities in its community since 1993 and obtained its official certification of Inuit firm status in 1995.

Peter Corcoran, Managing Director of Sandvik Canada Inc, started thinking about potential distribution channels in Canada’s north as soon as it became clear major miners like Agnico Eagle Mines (Meliadine and Amaruq mines) would not be deterred by challenges presented by a northern environment when developing their arctic mines.

“Our customers are our partners,” Corcoran says, “and they are building these new mines in the north.”

The northern environment brings unique challenges to providing support to customers like monitoring the springtime ice melt to schedule parts and equipment for barges, building ice roads and working with local communities’ resources, according to Sandvik.

In order to properly serve these customers Corcoran knew that, in the long run, Sandvik would need to leverage the expertise of an established and experienced local Inuit partner to efficiently bring Sandvik’s products to Nunavut’s mines.

“Sandvik believes for mining to prosper in Canada the communities that are impacted by these mining projects will need to be involved,” Corcoran explains, “and the mining companies need Indigenous groups in the region to be a part of their businesses long term. Recognising that, Sandvik has built this strategy to have a partner in these areas and we have been fortunate in finding Northern Networks Ltd in Nunavut.”

According to Derrick Webster, Chief Operating Officer of Eskimo Point Lumber Supply and Northern Networks Ltd, the company was built to serve Nunavut: “We are actually in the community, with local infrastructure, people, equipment, and when a mine needs something we are here.”

Becoming an authorised Sandvik distribution partner will allow Northern Networks Ltd to leverage its extensive knowledge of Canada’s north to support the growth of the mining industry and stimulate further economic development in their community, according to Sandvik.

For Ryan St John, President & Chief Executive Officer of Eskimo Point Lumber Supply and Northern Networks Ltd, it has always been about supporting his community and staying true to his values. The company is proud 60% of its 170 employees come from local Inuit communities.

“Sandvik is a really good fit for [Northern Networks Ltd] because our values align in terms of honesty and transparency,” St John says.

“We like aligning ourselves with companies that want to be the best, that is what we strive to do every day,” St John explains. “What appealed to us with Sandvik was that they are the best in their field in terms of technology, they are continually improving, advancing, creating that value for customers, and creating opportunities for the communities we serve.”

St John expects partnering with a technologically advanced company like Sandvik will have positive implications for Nunavut in the future, and that his community is ready to take advantage.

“As you automate [in mining] there is more opportunity for people in the community to be a part of that industry and gain employment thanks to new technology, a lot of younger people are so computer-savvy, and they are already working with their hands and equipment every day,” he said.

Corcoran is also excited to witness the changes mining – and Sandvik’s new distribution partnership – could bring to a community with such a large population of ambitious young people ready to enter the workforce.

“A company like Sandvik could bring opportunities to the community because of the reach we have with technology,” he explains. “We have to excite the young people! Technology excites them. People need to be aware that mining is an exciting industry and you can make a good living and get a good education.”