Zenith Energy and Independence celebrate solar start up at Nova 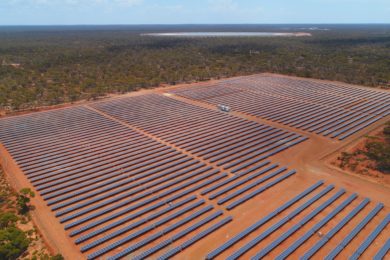 Operations at Independence Group’s Nova nickel-copper-cobalt operation in the Fraser Range of Australia are now being powered by a mix of diesel and solar energy after the on-site hybrid solar PV-diesel facility started up.

The two signed a contract back in 2018, amending an existing power purchase agreement.

Moffat said: “The proprietary hybrid system developed by the company is able to seamlessly manage the fluctuations in solar PV energy production to provide smooth, reliable power, without the need for batteries to stabilise energy delivery to Nova.”

He explained that batteries have their place in energy systems but are still expensive to deploy for these applications.

According to Moffat, the system is saving Nova in the order of 6,500 litres of diesel a day, and it is the first hybrid solar PV-diesel installation to have been funded on a commercial, standalone basis – without any government subsidies.

IGO’s Chief Operating Officer, Matt Dusci, said: “At IGO we are striving to reduce our carbon footprint. The implementation of new technologies with the construction of a hybrid‐solar system at Nova will enable IGO to reduce our CO2-equivalent emissions by approximately 6,500 t per annum. The solar facility will also decrease our cost structure through reductions in our diesel fuel usage.”

As part of an agreement between the two companies, Zenith will supply power from the solar PV‐diesel hybrid system for an initial six‐year period, with an option for Independence to extend for a further two years.