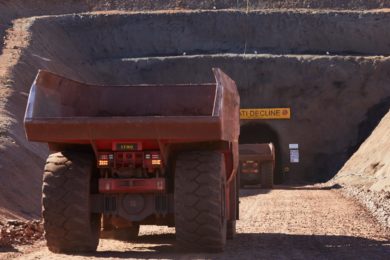 OZ Minerals says it has now produced its first saleable copper-gold concentrate from the Carapateena underground mine, in South Australia, just over two years since the board approved the development.

The company said the first concentrate had been produced into the pre-filter press feed tank at the mine, with the achievement meeting the December quarter 2019 schedule mapped out when Board approval was given in August 2017.

Pre-production capital cost at first saleable concentrate is around A$970 million ($669 million) with 2019 growth capital spend on track for guidance of A$540-$570 million, the company said.

OZ Minerals commented: “Sufficient saleable concentrate is expected to be produced to the filter feed tank over the coming days to then complete our first concentrate press. Over 280,000 t of development ore is stockpiled on the surface as the mine now enters a faster circa 12-month ramp-up towards reaching a 4.25 Mt per annum throughput rate by the end of 2020, dependent upon the cave performing as expected.”

“Today’s milestone represents the collaboration, support and hard work of a great many people including our operations and construction teams and the large number of contractors involved.”

He said the company’s key operational focus remains on underground development as the company ramps up the mine.

“The streamlined mine design with an expanded footprint will improve cave establishment, reduce risk during the ramp-up phase and may enable future annual throughput expansion opportunities as we continue to assess options to expand capacity above 4.25 Mt annually,” he said.

The company said this ramp-up period would allow it to test and optimise the plant throughout the first half of 2020 leading to gradual throughput and recovery increases to drive progressively higher output in the second half of the year. The now larger sub-level cave footprint along with an optimised mine design is expected to enable a faster cave ramp-up, provided the cave performs as modelled, the miner added, explaining that this would see the target 4.25 Mt/y run rate reached by end-2020 and the potential for a throughput boost.

Cole concluded: “Although we announce first saleable concentrate today, we have already commenced a block cave expansion scoping study looking at increasing both the life and production capacity of Carrapateena from 2025.”

Capital expenditure in 2020 will include permanent mine development, the circa-50 km Western Access Road construction and completion of conveyor installation and crusher, OZ said.