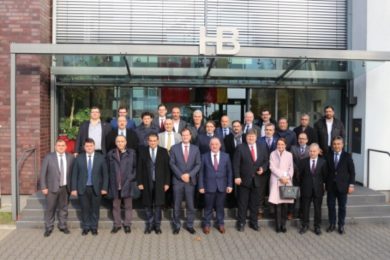 A delegation from Turkey’s Zonguldak mining region has signed a cooperation contract with Halbach & Braun Maschinenfabrik GmbH & Co that could see the hard coal operation double output and modernises its plant.

According to Halbach & Braun, Turkey’s current energy development plan, which aims to reduce its dependence on energy imports, involves the intensification of coal mining in the Zonguldak region of Turkey; a plan that requires investment in state-of-the-art mining technology.

Against this backdrop, the visit organised by Zonguldak eV Europa of a high-ranking delegation from the Zonguldak mining region and representatives of state politics – represented by Saadet Oruç, Chief Advisor to the President – to Halbach & Braun took place (pictured).

The mining equipment supplier from Hattingen has a strong market position in Turkey and, since last year, has been able to offer mine operators a considerably expanded range of products, it said.

Dr Dietrich Braun, Managing Partner of Halbach & Braun, said: “Our classic core competencies are crushing and conveying – underground and surface mining. Thanks to the participation of the Chinese Yangquan Coal Group in our company, we can now also offer complete range of longwall equipment including shields and shearer loaders.

“We adapt the basic design of the plants to our high-quality standards and to the individual requirements of our customers.”

Turkey’s state-owned mine operator TTK has enlisted the help of the company and, during the company tour in Hattingen, Muharrem Kiraz, Deputy Md of TTK, said: “Our goal is 100% mechanical extraction with modern and highly productive plants from Halbach & Braun.”

In the coming years Zonguldak is to be developed into an energy centre, according to the Germany-based company.

The Ruhr area of Germany could serve as a model here – with the difference that coal production will be expanded instead of discontinued, the company said.

Metin Demir, Chairman of the Regional Chamber of Industry and Commerce, confirmed this: “We have a 180-year mining tradition, and now we are shaping our future. Together with the players in business, associations and politics and also with the employee representatives, we have founded a development association for the region that expressly provides for cooperation with German companies under our cooperation partner Halbach & Braun. We would like to profit from their competence and also from the experiences of the Ruhr area.”