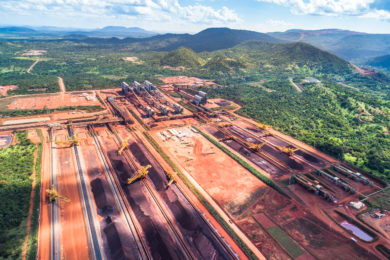 To reduce operating costs and greenhouse gas emissions, Vale is investing BRL20 million ($4.9 million) into the implementation of a smart energy management system to improve equipment performance and process automation across its production chain – from mine to port.

The system, known as SmartEnergy, should lead to the installation, by 2021, of 2,000 intelligent electric power meters at 57 of the company’s operating units and large equipment in Brazil – for example, in ore grinding circuits, long-distance conveyor belt systems and pumping systems.

The smart meters reduce production losses through continuous evaluation of the quality of power and identification of the causes of failures in power supply. Tests using this technology in two mines have saved BRL90 million per year, according to Vale, eliminating equipment shutdowns due to incorrect activation of the “electrical protective system”.

Arantes said: “Often, the electrical protective system shuts down important equipment or processes due to electric power fluctuations that could be tolerated without adding any risks to operations. These small interruptions affect productivity as energy is wasted in restarting the equipment and processes as well as resuming normal operating capacity, not to mention the impact on production and increased CO2 emissions.”

SmartEnergy IT Coordinator, Laysa Mello, explained that the system will standardise the data generated by smart meters to analyse the energy use across the company.

“This standardisation enables better planning of energy consumption and demand in all operations, offering unprecedentedly higher data availability and accuracy,” she said. Although it is an off-the-shelf software already available on the market, SmartEnergy had to be customised for Vale’s needs, the company said. A team of 65 employees was trained to operate the system already deployed in mines in Pará and Minas Gerais and at the Ponta da Madeira port complex, in São Luís (Maranhão).

In 2017, Vale tested the smart meters at the S11D iron ore mine (pictured) and the Salobo copper mine, in southeastern Pará. Salobo saw a reduction of 107 hours of unexpected production shutdown caused by power quality issues, which translated into a production increase of 1.2 Mt/y compared with 2017 and 2018.

In the case of S11D, 18 hours of production shutdown were avoided at the plant, resulting in an increase of 130,000 t in annual production. By the end of 2019, more than 100 smart meters at S11D were connected to SmartEnergy, and, in 2020, Vale plans to deploy this equipment worldwide.

In an intermediate scenario over 10 years, the company expects to save BRL920 million worth of electric power through the installation of smart meters and process management automation in plants in Brazil and abroad. The aim is to reduce greenhouse gas emissions by 120,000 t/y, equivalent to the emissions – in terms of power consumption – of 14,400 average homes. Variables considered in this calculation included the cost of electric power; iron ore, nickel, and copper prices; and Vale’s own production.

In the long run, the project will also focus on reducing other fuels used by Vale, such as diesel, natural gas, and the bunker fuel used in ore carriers. “That brings an even greater potential to reduce emissions.”

At a December meeting with investors in New York and London, the company announced a long-term goal of neutralising CO2 emissions from its operations by 2050 and revised its emission reduction goal by 2030 to comply with the Paris Agreement. The percentage decrease will be announced in the first half of 2020.