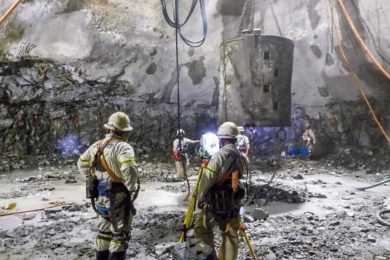 Ivanhoe Mines says it is fast-tracking a feasibility study on a smaller-scale, early-stage development plan at its Platreef palladium, platinum, nickel, copper, gold and rhodium project, in the Bushveld Complex of South Africa.

The move comes as spot prices of palladium and rhodium – two key metals contained in the Platreef ore – have soared in recent months. This has propelled Platreef’s ‘metals-price basket’ to a new, all-time high, Ivanhoe said.

Palladium prices surpassed a record $2,100/oz recently as stricter air-quality rules continue to boost demand for the metal used in vehicle pollution-control devices, while the price of rhodium has surged 32% already this month, attaining a price of more than $8,200/oz – the highest price since it hit more than $10,000/oz in 2008.

Ivanhoe’s plan would accelerate the mine’s first production by using Shaft 1 as the mine’s initial production shaft, followed by expansions to the production rate outlined in the project’s 2017 definitive feasibility study (DFS), it said. Ivanhoe’s smaller-scale mine design would also be optimised to target the highest-grade areas of the mineral resource in close vicinity to Shaft 1.

Platreef’s Shaft 1 currently is at a depth of 957 m below surface. It is scheduled to be completed to a final depth of around 1,000 m by the end of July. Work on Shaft 1’s 950-m-level station (pictured) – the shaft’s third and final station – is expected to be completed in March 2020.

Shaft 1 was previously expected to become the primary ventilation shaft during the project’s initial 4 Mt/y production case, with Shaft 2, around 100 m northeast of Shaft 1, providing primary access to the mining zones.

In July 2017, Ivanhoe, which indirectly owns 64% of the Platreef project through its subsidiary, Ivanplats, issued an independent DFS for Platreef covering the first phase of production at an initial mining rate of 4 Mt/y. The DFS estimated Platreef’s initial average annual production rate would be 476,000 oz of platinum, palladium, rhodium and gold, plus 21 MIb (9,525 t) of nickel and 13 MIb (5,897 t) of copper.