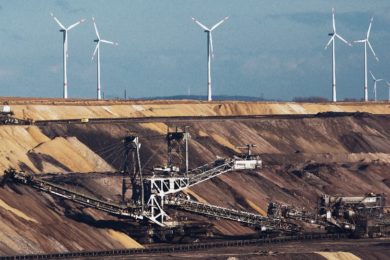 A report from consultancy McKinsey has raised concerns about the mining industry’s climate change and decarbonisation strategy, arguing it may not go far enough in reducing emissions in the face of pressure from governments, investors, and activists.

The report, Climate risk and decarbonization: What every mining CEO needs to know, from Lindsay Delevingne, Will Glazener, Liesbet Grégoir, and Kimberly Henderson, explains that extreme weather – tied to the potential effects of climate change – is already disrupting mining operations globally.

“Under the 2015 Paris Agreement, 195 countries pledged to limit global warming to well below 2.0°C, and ideally not more than 1.5°C above preindustrial levels,” the authors said. “That target, if pursued, would manifest in decarbonisation across industries, creating major shifts in commodity demand for the mining industry and likely resulting in declining global mining revenue pools.”

They added: “Mining-portfolio evaluation must now account for potential decarbonisation of other sectors.”

The sector will also face pressure from governments, investors, and society to reduce emissions, according to the authors.

“Mining is currently responsible for 4-7% of greenhouse gas (GHG) emissions globally. Scope 1 and Scope 2 CO2 emissions from the sector (those incurred through mining operations and power consumption, respectively) amount to 1%, and fugitive methane emissions from coal mining are estimated at 3-6%.

“A significant share of global emissions – 28% – would be considered Scope 3 (indirect) emissions, including the combustion of coal.”

While there have been a number of high-profile mining companies making carbon emission pledges in the past 18 months – BHP pledging $400 million of investment in a low carbon plan being one notable example – the authors say the industry has only just begun to set emissions-reduction goals.

“Current targets published by mining companies range from 0-30% by 2030, far below the Paris Agreement goals, which may not be ambitious enough in many cases,” they said.

Through operational efficiency, and electrification and renewable-energy use, mines can theoretically fully decarbonise (excluding fugitive methane), according to the authors, with the disclaimer that building a climate strategy, “won’t be quick or easy”.

Water stress was one area the authors homed in on, saying that climate change is expected to cause more frequent droughts and floods, altering the supply of water to mining sites and disrupting operations.

The authors found that 30-50% of the production of these four commodities is concentrated in areas where water stress is already “high”.

“In 2017, these sites accounted for roughly $150 billion in total annual revenues and were clustered into seven water-stress ‘hot spots’ for mining: Central Asia, the Chilean coast, eastern Australia, the Middle East, southern Africa, western Australia, and a large zone in western North America,” the authors said.

The authors continued: “Climate science indicates that these hot spots will worsen in the coming decades. In Chile, 80% of copper production is already located in ‘extremely high’ water-stressed and ‘arid’ areas; by 2040, it will be 100%. In Russia, 40% of the nation’s iron ore production, currently located in ‘high’ water-stressed areas, is likely to move to ‘extreme’ water stress by 2040.”

And, mining regions not accustomed to water stress are projected to become increasingly vulnerable, according to the report.

The authors said: “Depending on the water-intensiveness of the processing approach, such changes, while seemingly minor in percentage terms, could be critical to a mine’s operations or licence to operate.”

Mining executives in these regions are acutely aware of the water issue, according to the authors.

“For instance, Leagold Mining recently shut down its RDM gold mine in Brazil for two months because of drought conditions, even though it had built a dam and a water pipeline,” they said.

Even in areas with low water stress, certain water-intensive mining processes are jeopardised.

“In Germany – not a country known for being vulnerable to drought – a potash miner was forced to close two locations because of severe water shortages in the summer of 2018, losing nearly $2 million a day per site,” they said.

“The frequency and severity of these conditions are expected to increase along with the current climate trajectory.”

To improve resiliency, companies can reduce the water intensity of their mining processes, the authors said. They can also recycle used water and reduce water loss from evaporation, leaks, and waste. Mining companies can, for example, prevent evaporation by putting covers on small and medium dams.

In the long term, more capital-intensive approaches are possible, according to the authors. This could involve new water infrastructure, such as dams and desalination plants. Companies can also rely on so-called “natural capital”, like wetland areas, to improve groundwater drainage.

The authors said: “The option of securing water rights is becoming harder and can take years of engagement because of increased competition for natural resources and tensions between operators and local communities. Basin and regional planning with regulatory and civic groups is an important strategy but cannot alone solve the underlying problem of water stress.”

On the reverse, flooding from extreme rains can also cause operational disruptions, including mine closure, washed-out roads, or unsafe water levels in tailing dams, with flooding affecting some commodities more than others based on their locations.

The authors’ analysis showed iron ore and zinc are the most exposed to ‘extremely high’ flood occurrence, at 50% and 40% of global volume, respectively.

Companies can adopt flood-proof mine designs that improve drainage and pumping techniques, the authors said, mentioning the adaptation of roads, or the building of sheeted haul roads, as examples.

Moving to an in-pit crushing and conveying method would also help alleviate potential floods, replacing mine site haulage and haul roads with conveyors.

When it comes to incoming extreme heat in already-hot places – like China, parts of North and West Africa and Australia – the authors noted that worker productivity could fall and cooling costs may rise, in additon to putting workers’ health (and sometimes their lives) at risk.

“Indirect socioeconomic consequences from climate change can also affect the political environment surrounding a mine,” they said.

Ongoing decarbonisation is likely to have a major impact on coal – “currently about 50% of the global mining market, would be the most obvious victim of such shifts”, the authors said – but it would also affect virgin-ore markets.

“In a 2°C scenario, bauxite, copper, and iron ore will see growth from new decarbonisation technologies offset by increased recycling rates, as a result of the growing circular economy and focus on metal production from recycling versus virgin ore,” they said.

At the other end of the spectrum, niche minerals could experience dramatic growth. As the global electrification of industries continues, electric vehicles and batteries will create growth markets for cobalt, lithium, and nickel.

Emerging technologies such as hydrogen fuel cells and carbon capture would also boost demand for platinum, palladium, and other catalyst materials, while rare earths would be needed for wind-turbine magnets.

The authors said: “Fully replacing revenues from coal will be difficult. Yet many of the world’s biggest mining companies will need to rebalance non-diverse mineral portfolios.

“Many of the largest mining companies derive the bulk of their earnings from one or two commodities. Copper-heavy portfolios may benefit from demand growth due to widespread electrification, for example. And iron ore- and aluminium-heavy portfolios may see an upside from decarbonisation technologies, but they are also more likely to be hit by rising recycling rates.”

According to the authors, the mining industry generates between 1.9 and 5.1 gigatons of CO2-equivalent of annual greenhouse gas (GHG) emissions. Further down the value chain (Scope 3 emissions), the metals industry contributes roughly 4.2 gigatons, mainly through steel and aluminium production.

To limit warming to 1.5°C, a reduction of at least 85% would likely be needed.

“Mining companies’ published emissions targets tend to be more modest than that, setting low targets, not setting targets beyond the early 2020s, or focusing on emissions intensity rather than absolute numbers,” the authors said.

To estimate decarbonisation potential in mining, the authors started with a baseline of current emissions by fuel source, based on the MineSpans database of mines’ operational characteristics, overlaid with the possible impact of, and constraints on, several mining decarbonisation levers.

The potential for mines varied by commodity, mine type, power source, and grid emissions, among other factors.

“Across the industry, non-coal mines could fully decarbonise by using multiple levers. Some are more economical than others – operational efficiency, for example, can make incremental improvements to the energy intensity of mining production while requiring little capital expenditure,” they said. Moving to renewable sources of electricity is becoming increasingly feasible too, even in off-grid environments, as the cost of battery packs is projected to decline 50% from 2017 to 2030, according to the authors.

“However, in some cases, battery-electric vehicles have a 20% lower total cost of ownership versus traditional internal-combustion-engine vehicles. Newmont, for example, recently started production at its all-electric Borden mine in Ontario, Canada.”

The authors said: “Several big mining companies have installed their own sustainability committees, signalling that mining is joining the wave of corporate sustainability reporting and activity. Reporting emissions and understanding decarbonisation pathways are the first steps toward setting targets and taking action.”

Yet, these actions are currently too modest to reach the 1.5-2°C scenario and may not be keeping up with society’s expectations – “as increasingly voiced by investors seeking disclosures, companies asking their suppliers to decarbonise, and communities advocating for action on environmental issues”.

They concluded: “Mining companies concerned about their long-term reputation, licence to operate, or contribution to decarbonisation efforts may start to consider more aggressive decarbonisation and resilience plans.”