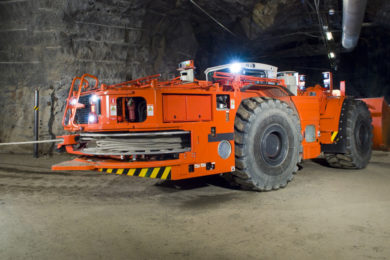 Last month at the IOM3 Mining with and for the Electric Vehicle conference in London, Sandvik Mining & Rock Technology Parts, Service and Warranty Lead and Sales Manager, Brian Carroll talked about a wide range of underground electric developments at the company in his talk ‘Electrification and Automation: The Future of Mining.’ This included a video showing the new 25 t capacity LH625iE LHD in operation before shipping to LKAB Kiruna as well as discussion of the attributes of electric LHDs from an operational point of view including more peak torque due to the electric motor meaning faster bucket filling. There is no delay in reaction time as there is with a diesel engine plus the electric motor can be overloaded temporarily.

On Sandvik electric machines, there are two major pieces of news. First, LKAB have announced that the record capacity electric LHD, the LH625iE, arrived at LKAB’s underground Kiruna iron ore operation in late January 2020 to start trials. The LHD features a 9.5 m³ bucket and 25 t payload capacity. The basic LH625iE design is well-proven being based on the tethered LH625E that has already been used at the mine for many years.

Today’s Sandvik LH625iE belongs to its i-series, featuring advanced technology, latest digital solutions and smart connectivity. As examples of the loader’s intelligence, the new Sandvik LH625iE is equipped with Sandvik Intelligent Control System and My Sandvik Digital Services Knowledge Box™ as standard, and to fully utilise the enormous capacity it offers, the loader can be fitted with Sandvik’s Integrated Weighing System (IWS), as well as AutoMine® and OptiMine® solutions.

“The collaboration between Sandvik Mining & Rock Technology and LKAB’s mine in Kiruna goes back 20 years. We are satisfied with the loaders delivered from Sandvik, and have 14 in production today. We have had a long and good collaboration and look forward to continuing,” says Michael Palo, Business Area Manager at LKAB. The LH625iE is currently being prepared for the mine in terms of safety, then drivers and maintenance personnel will be trained. The first machine is expected be in operation by end February said the mining company.

The second piece of news is that Carroll said in his talk that Sandvik is working on a battery-assisted version of its highly successful tethered machine the LH514E which will be known as the LH514BE. It is understood this will still use a combination of tethered cable and battery, using battery for tramming and the cable when mucking out. The development of horizontal cable reeling means there is the possibility to operate with the connecting point on either side of the unit. Low cable tension means long cable life and a lower cable reeling point means no cable damage on drift corners. Carroll said that the LH514BE is in the factory acceptance testing stage in Finland with field tests set to start soon.

Moving to Sandvik-owned battery mining machine specialist Artisan Vehicle Systems, there are 10 t (A10) and 4 t (A4) LHD models and 50 t (Z50) truck models available. Both the Z50 truck and the A10 loader have autoswap functionality, in which battery swapping can be done without using a crane.