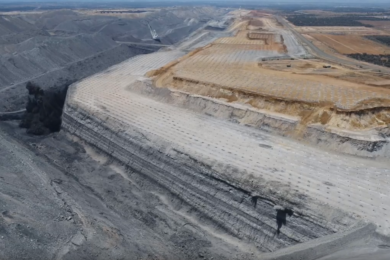 The BHP Mitsubishi Alliance-owned (BMA) mine completed a blast in December that saw 4.7 Mcu.m of overburden shifted in a blast fired with 2,194 t of bulk explosives across 3,899 holes.

Back in October, BHP Mitsui Coal’s Poitrel mine, in Queensland, became the holder of the title of world’s largest blast using wireless technology after successfully completing the third blast in a trial series to test Orica’s WebGen technology. The blast saw 1.3 million cu.m of overburden shifted in a strata blast fired with 1920 WebGen 100 units across 534 holes, BHP Mitsui said.

Caval Ridge Drill and Blast Superintendent, Dallas Gostelow, said the electronic blast was loaded over 14 days, involving engineers, schedulers and the E and F Blast crews. It involved a combination of four related blast patterns, using 8,144 detonators – a significant number that Gostelow said the company had never set before at the one time.

He said there were significant safety, efficiency and cost improvements to be made using the electronic technology.

“Timings for the detonators are fully programmable and each blast hole is physically connected to the surface by a wire, but the systems is less complicated and fully digitised, which means higher fidelity of tie in to reduce misfire potential,” he said.

The ability to fire larger blasts, or multiple blast patterns in one event, means downtime for equipment is kept to a minimum, according to BMA.

Jason Smith, Principal Category Management TCO, Drill Blast & Geology, said the successful outcome of the blast was down to the collaboration across asset, function and supplier.

He said the commercial team and Caval Ridge worked with Dyno Nobel to deliver improved technology that would provide bigger and more accurate shots with significant improvements to safety, productivity and cost.

“The significance of it is the precision timing you can get from using electronics rather than pyrotechnical blasting, which requires thousands of metres of on bench tie-in work, and can lead to poor blast fragmentation,” Smith said.

“With the collaboration between Dyno and BMA, it is allowing Dyno to improve their product and giving BMA the advantage of better blasting and fragmentation and larger shots.

“This is a perfect example of the commercial teams working in the background to strengthen a supplier relationship and the site and supplier working together to deliver superior results.”