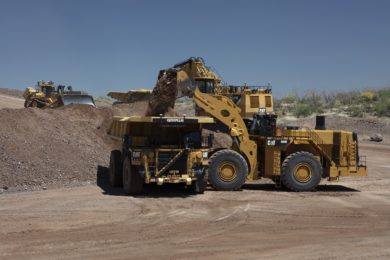 Newmont’s Boddington operation, in Australia, is to become the world’s first open-pit gold mine with an autonomous haul truck fleet after the miner’s Board of Directors unanimously approved investment in an Autonomous Haulage System (AHS) from Caterpillar.

The move, which will enhance safety and productivity and is expected to be fully operational in 2021, will also see the Boddington mine life extended, according to Newmont.

Tom Palmer, President and Chief Executive Officer, said: “Not only does Boddington continue to deliver strong performance, our investment in autonomous haul trucks will generate an internal rate of return greater than 35% with a more controlled and efficient haulage operation.

“We are also uniquely positioned in the gold sector to support effective implementation and operation of the fleet thanks to the technical capabilities and previous experience of leaders in our business. Simply put, Boddington will be a safer, more productive world-class gold mine in a top-tier jurisdiction.”

Total net investment in Boddington’s AHS will be $150 million, with efficiencies expected to extend the mine’s life by at least two years, Newmont said. The project will involve adding some new AHS-enabled Caterpillar 793Fs to the haulage fleet and retrofitting some existing 793Fs with AHS capabilities, a Newmont spokesperson confirmed. The company said it also saw additional upside potential from the replication of the AHS at other Newmont operations.

The company said: “Boddington’s autonomous Caterpillar haul trucks will feature rigorous safety controls that reduce employee exposure to potential vehicle interactions. No injuries have been recorded from AHS operations since their introduction into the mining industry.”

Newmont said it is also executing a “robust people strategy” at Boddington, providing opportunities for reskilling and redeployment of haul truck drivers to other roles supporting the AHS.