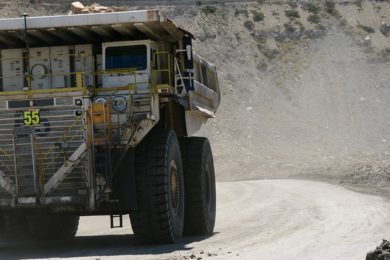 Batchfire says it is continuing to invest in the Callide coal mine in Queensland and the local and regional economies. A A$40 million investment in the Boundary Hill South Boxcut is starting to see production ramp up, with over 560,000 t of coal mined and exported from this new pit since operation commenced in August 2019. Batchfire operates three major mining areas of Dunn Creek, Trap Gully and Boundary Hill South which are spread across 22 km of mine site.

This distance brings its own set of information management challenges. Batchfire technology systems are generally several years or more of age and Batchfire is implementing a data driven approach to managing the business. Recent additions of Ready Track (Linxio) and Mineware Argus data management systems on rear dump (RD) trucks and excavators respectively have enabled improved reporting and decision-making.

A new Mine Information and Reporting System (MIRS) project has also commenced to provide an OEM supported, sustainable, integrated solution to collecting and managing data from over 18 software systems across the mine. A relocated and refreshed Dispatch Mine Control Centre is also being established shortly.

Chris Coombes, Batchfire Resources Business Head, said in addition to the above, a further A$2.7 million over three years is being invested in the new technology, including MaxMine that will bring long-term planning through to real-time production data together. The leading MaxMine technology investment supplied by Resolution Systems will help drive improved performance and productivity of the RD truck fleet and hence increase the effectiveness of mine planning, maintenance strategies, and operational efficiencies within the pre-strip and coal mining fleets.

Kim Eales, Principal Mining Integration leader at Resolution Systems said: “With over 2 million hours of on-asset operations both domestically and internationally, MaxMine has a proven track record on both mechanical and electric machines, delivering multi-million dollar cost savings and production increases to clients across the globe.” The implementation of the MaxMine system is expected to enable the operation to increase productivity and reduce production coststhereby increasing the economic reserves within the Callide Basin. This is good for both the mine and the community it supports Coombes said.

Callide Coal Mine in Central Queensland is an open-cut operation located 120km southwest of Gladstone and 20 km northeast of the thriving regional township of Biloela. The mine has operated since 1944 producing low sulphur, sub-bituminous thermal coal primarily for domestic power generation and alumina refining. Under the ownership of Batchfire Resources (October 2016) the mine is continuing to meet the quality and performance benchmarks sought by its domestic customers while looking to expand export opportunities. The Callide mining tenure extends across 180 square kilometres and contains an estimated coal resource of up to 1.7 billion tonnes. Conventional open cut mining methods are employed using two draglines, haul trucks and excavator fleets. Saleable coal production averages 10 Mt per year.