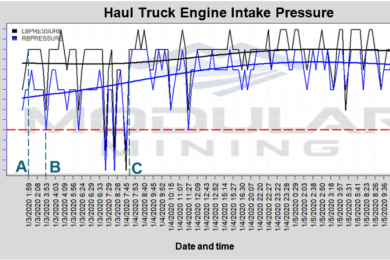 As the mining industry leans more on the Internet of Things (IoT) and technological advances to drive improvements, more operations are adopting remote practices to increase efficiency and reduce personnel safety risks. Equipment maintenance is one aspect of the mining value chain that can especially benefit from such capabilities; remotely monitoring component conditions, in real time, can help maintenance technicians identify potential problems earlier to minimise damage and prevent catastrophic failure. Remote maintenance analysts are also removed from in-field safety hazards, and since they can troubleshoot issues remotely, can help reduce the hands-on, in-pit diagnostic time often required by maintenance technicians.

Original Equipment Manufacturer (OEM) sensors are helpful in notifying operators and maintenance personnel of problematic conditions affecting critical components in their equipment units. But Modular Mining argues that relying entirely on those sensors creates a reactive maintenance approach that can delay notification alerts about preventable damage; by the time the default factory threshold settings that trigger many of these notifications have been met, the damage may have impacted other components.

A large open pit mine in Peru utilises Modular Mining’s MineCare® Maintenance Management system, which enables them to approach equipment maintenance more proactively. The site also leverages Modular Mining’s RemoteCare™ service, which provides dedicated MineCare experts to remotely monitor the real-time condition of their equipment components. By focusing on component condition, rather than relying entirely on OEM sensors, the mine can identify emerging problems before significant damage or complete failure occurs. A recent example of this value is provided via the case study below.

The RemoteCare team monitoring the equipment at the mine received an alert from the MineCare system about high differences in the intake pressures between the left and right banks in the engine of one of the mine’s haul trucks. Given the potential for serious engine damage if left unaddressed, as well as for costly downtime to both diagnose and replace the failing component, quickly identifying and resolving the root cause of the intake pressure difference was an immediate priority.

Together with the mine, RemoteCare personnel had previously established a custom, user-defined alert to monitor various component parameters, including intake pressures, on their equipment fleet. When the alert was triggered, the RemoteCare analyst started troubleshooting its possible cause and checking the real-time condition of other potentially impacted components. After verifying the alert’s validity, the analyst leveraged the data from the MineCare system to generate a report, which was immediately sent to the mine’s maintenance technicians en route to conduct a field inspection.

By leveraging data from the MineCare system to identify the failing turbocharger early, the RemoteCare team helped the mine prevent damage to the truck’s engine injectors and other components. Replacing the failing turbocharger, rather than the 18 engine injectors that may have been compromised if the low intake pressure condition was left unaddressed, enabled the mine to save nearly $80,000 (US) in avoided injector replacement, labour, and additional downtime costs.

If the mine had relied on the truck’s OEM sensor alone to identify the failing turbocharger, its deterioration would have progressed to the point of extensive engine damage, incurring significantly higher costs for repair and longer downtime. Modular Mining’s MineCare system and RemoteCare service were instrumental in identifying the timely need to replace the truck’s worn turbocharger. Left unaddressed, the high exhaust temperatures generated by the failing turbocharger’s low intake pressure would have likely caused significant damage to many, if not all, of the truck’s 18 engine injectors. By replacing the turbocharger before it caused this additional damage, the mine avoided extensive costs, as well as the lost production and downtime that would have resulted from the more extensive repair.

Turbocharger failure is relatively common in mines; typically, a site with 25 or 30 trucks will have to replace a turbocharger approximately two to three times per month (based on a 9,000-hour turbocharger life expectancy). By establishing user-defined alerts about such parameters as intake pressure differences, and monitoring their occurrence, the MineCare system with RemoteCare service can help maintenance teams troubleshoot and repair issues faster, in a more scheduled manner, to reduce costs and drive productivity.