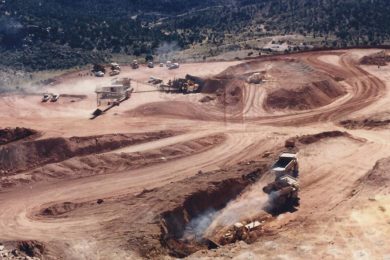 Rock Kleen Tailings Processing Technology neutralises the residual cyanide and removes nitrogen produced by blasting rocks in the mining process, making the materials available for use as industrial minerals, according to Itronics.

This means it offers potential value to miners through the recovery of precious and base metals, the removal of cyanide (from leaching) and nitrogen (from blasting), the potential to produce industrial minerals products from ‘waste’ rock, and the potential elimination or reduction of the capital costs associated with conventional tailings storage facilities.

“Mineralogical analysis has defined potential industrial mineral products for the two separate resources allowing for 100% of the available resources being converted to saleable products,” it said.

Rock Kleen tech neutralises the residual cyanide and removes nitrogen produced by blasting the rocks in the mining process, making the materials available for use as industrial minerals, according to Itronics. This is where the company’s GOLD’n GRO Multi-Nutrient fertilisers come into the equation, according to President, Dr John Whitney.

“Conventional cyanide leaching may recover a high percentage of soluble gold and a portion of the silver, but all the remaining materials are left as a waste product,” the company says. “Rock Kleen recovers additional gold/silver and base metals, and then the remaining rock can be sized for commercial grades of industrial minerals for sale leaving zero waste from the mining enterprise.”

John Key, Vice President, Projects for Whitney & Whitney, said: “Pilot scale testing is very promising. Each deposit must be evaluated on a standalone basis but many existing operations and heap leach projects being designed now could potentially benefit greatly by including a design using Rock Kleen or including the Rock Kleen technology into their flowsheets in conjunction with cyanide leaching.”