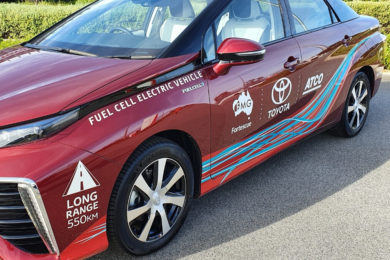 ATCO and Fortescue Metals Group say they have signed an agreement to explore the potential to deploy hydrogen vehicle fuelling infrastructure in Western Australia.

FMG, only last month, agreed to team up with Anglo American, BHP and Hatch to form a Green Hydrogen Consortium looking at ways of using green sources of hydrogen to accelerate decarbonisation within their operations globally.

It also already has a partnership in place with Australia’s CSIRO on hydrogen technologies to support the development of new industries, create jobs and pave the way for low emissions export opportunities for Australia.

ATCO, meanwhile, says it has led the development of renewable hydrogen in Australia, and was the first company to generate hydrogen through electrolysis, powered only by solar.

ATCO and FMG will now collaborate to facilitate the construction and operation of a combined hydrogen production and refuelling facility at ATCO’s existing facility in Jandakot, Perth, with the possibility of wider deployment across the state.

The initial refuelling facility will provide ATCO, Fortescue and agreed third parties with the opportunity to refuel vehicles capable of utilising hydrogen as the primary fuel source, Atco says. This includes a fleet of Toyota Mirai fuel cell electric vehicles that have been made available by Toyota Motor Corp Australia.

“The project will serve as a showcase for hydrogen mobility in the state and support the transition to the next generation of zero-emission transport,” ATCO said.

ATCO’s Managing Director in Australia, Pat Creaghan, said ATCO is committed to expediting the global transition to a net-zero emissions balance in the future and sees a significant opportunity for hydrogen to play a role in that future.

“ATCO’s Clean Energy Innovation Hub has been generating and testing the use of renewable hydrogen for more than six months in gas blending and power applications. The hub provides a fantastic base from which to partner with Fortescue to contribute to Western Australia’s burgeoning renewable hydrogen industry.”

Building on the knowledge gained through the development and implementation of this hub, ATCO says it is currently conducting a feasibility study – with A$375,000 ($226,148) in funding from WA’s Renewable Hydrogen Fund – into the development of a commercial scale renewable hydrogen production plant.

Fortescue Chief Executive Officer, Elizabeth Gaines, said the miner was committed to working with other organisations to position Australia as a leader in the global hydrogen economy.

“As the world moves towards a lower carbon future, hydrogen has the potential to play a key role in the future energy mix and we want to ensure we remain at the forefront of Australia’s renewable hydrogen industry,” Gaines said.

“Identifying and establishing partnerships is critical to unlocking the future potential of hydrogen and we look forward to working with ATCO to capitalise on the economic opportunities associated with hydrogen and support the development of a competitive hydrogen industry.”

ATCO and Fortescue have sought funding under the State Government’s Renewable Hydrogen Fund to support the development of this infrastructure, and are awaiting the outcome of this submission.