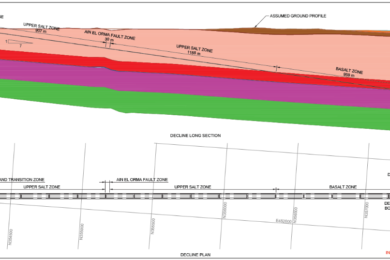 Emmerson PLC, the Moroccan-focused potash development company, has announced that it has finalised the feasibility study components for the mine access design and costing for its world class Khemisset Potash Project in northern Morocco. The scoping study development approach ws confirmed with the mining horizon proposed to be accessed by twin declines constructed using underground mining machinery (continuous miners) which will later be used in mining production.

The direct capital cost estimate of the mine access component is approximately $34.1 million including a 21.7% contingency, a slight reduction on the scoping study estimate of $34.7 million. This cost forecast Emmerson says places Khemisset in the lowest 10% for mine access cost for potash developments globally. The design and estimate was completed by independent engineering group, Golder Associates, according to AusIMM guidelines for capital cost estimates.

The mine access design and cost estimates are the final deliverable prior to the completion of the full feasibility study, which remains on track for first half 2020 completion despite challenges presented by the ongoing COVID-19 outbreak. The decline excavations are expected to take 14 months.

In more detail, the proposed accessto the potash horizon is comprised of twin declines driven at a slope of 1 in 7, which is similar to the scoping study design, however, it provides significant improvements to the original concept primarily due to the new preferred plant site location. The construction of twin declines allows one to be utilised for personnel access and air intake for mine ventilation, and the other for the mineral transport conveyor and ventilation exhaust. The declines will be constructed using continuous miners, which will eventually be responsible for mine production and gallery development. The declines have been designed to access the primary horizon in the eastern edge of the deposit, at a depth of approximately 450 m below surface. The decline position and orientation has been selected to balance accessing the optimum part of the deposit at the shallowest depth while also allowing the plant site to be located as close as possible to the existing local infrastructure (roads, power, water).

The decline will be driven through three key lithologies: minor clay formation (~10 m thick); primary massive salt horizon (~320 m thick); and an overlying basalt unit (~60 m thick). At surface, a portal will be established to provide a stable entry way to the mine through the near surface lithologies and minimise the volume of surface water and runoff entering the decline. The proposed portal structure is comprised of a series of precast concrete box sections placed in an open cut, excavated to the level where the upper salt strata is assumed to be self-standing (10 m below surface), and then backfilled to restore the original ground surface level. Drainage channels and pumping will be used to catch and remove any water running down the floor of the decline. Mechanical excavation can begin as soon as the upper salt horizon is reached. The portal box section structure will terminate when there is sufficient excavation roof cover in the upper salt to create the tunnel opening; with the information available, this is expected at a depth of approximately 16 m below surface.

The total length of each decline is planned to be approximately 3,200 m with dimensions of 8 m by 3.5 m. A barrier pillar separates the two parallel declines by a distance of 24 m. This separation distance is equivalent to three tunnel spans, chosen to minimise the length of connecting cross cuts whilst maintaining sufficient separation to isolate one tunnel from the other in the case of an emergency. Cross cuts are spaced every 200 m along the decline, a distance selected to provide an efficient tramming distance for shuttle cars between continuous miners and the load-out conveyor during construction. This also allows the machines to operate with a 200 m power cable attached as a typical machine tether length.

Hayden Locke, CEO of Emmerson, commented: “One of the most prominent barriers to entry in the potash market is the overall capital cost to develop the mine. Mine access, typically via a shaft, is one of the single largest determinants of overall capital cost of these projects, and can be hundreds of millions, and in many cases billions, of dollars. We are fortunate to have a project where this major capital component can be achieved for only $34.1 million, a cost saving of over 90% when compared to most projects globally. This reduction in capital cost has numerous knock-on benefits including allowing a smaller project to be developed and providing a more readily financeable project regardless of potash prices.”