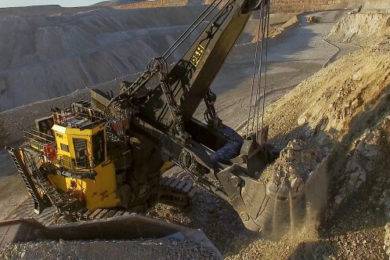 Komatsu says it recently officially launched the P&H 2650CX Hybrid Shovel, an innovative loading tool for the mining market. This new machine is the result of extensive customer focus groups outlining the need for an alternative to the 550 to 700 ton hydraulic excavator at a reduced total cost of ownership. The hybrid shovel the company says combines the reliability of P&H rope shovels, the flexibility of Komatsu hydraulic excavators, and the technology of Komatsu electric drive wheel loaders to reduce the total cost of ownership by 10 to 15%.

In early 2016, the first pilot P&H 2650CX Hybrid Shovel went to work. Over its 22,000 hours running in the field, it has demonstrated a 40 to 50% reduction in fuel consumption compared to hydraulic excavators, while maintaining equal or better production. During this time, Komatsu’s engineering and field support teams have conducted extensive reliability growth testing which has led to essential validation and verification. The machine has been tested in extreme mining environments, including hot Arizona summers and Rocky Mountain winters at high elevation.

“We introduced SR (switched reluctance) technology into our surface wheel loader products more than two decades ago and now have more than 150 surface wheel loaders utilising it around the world. The same technology that revolutionized the wheel loader market is being brought to shovels. SR Hybrid Drive Technology is leveraged on the hybrid shovel to capture regenerative power that is naturally produced. Diesel energy is converted to electrical energy through a switched reluctance generator, which provides power to hoist, crowd, and swing motors. When the 2650CX lowers its bucket or decelerates swing speed, motors become generators, supplying energy to the machine and shutting off fuel supply. Engines do not burn fuel for about 17% of a typical loading cycle, including dig, swing, dump and return swing, contributing to reduced fuel consumption and longer engine life.”

To maximise efficiency, the machine utilises electric power over hydraulic to enable regeneration. The result is 50-60% less hydraulic fluids needed compared to hydraulic excavators. This translates to additional savings through reduced fluid costs, reduced hydraulic routings and fittings, and a reduced environmental impact.

A major difference between a P&H hybrid shovel and the P&H rope shovel is how the machine is powered. Rather than being tethered to a high-voltage trail cable, the 2650CX uses twin-diesel engines — available in Tier 1, Tier 2 or Tier 4 Final — rated for 2,386 kW (3,200 HP). With no trail cable needed, the 2650CX has the mobility to easily tram to different areas of a mine site. This also gives the hybrid shovel the flexibility to operate in remote locations or greenfield mines, which may not have electric grid access.

“The capabilities of the 2650CX provide exceptional reach and height, compared to hydraulic excavators. This allows for higher bucket fill factors, increased material excavated between moves, and operation in bench heights up to 16 m (52 ft). Additionally, efficiency comes from the fixed-boom architecture of the 2650CX. The fixed boom reduces digging mass from hoist motion, requiring less energy during the dig cycle and maximising bail pull throughout the dig profile.”

“The hybrid shovel was designed by the engineering team in Milwaukee, Wisconsin, who are internationally recognised for designing mining-duty machines built for reliability and long-life. Reliability, maintenance, and serviceability were central focuses of the machine design, with engineers drawing on the expertise of mine maintenance and operations teams around the world. The 2650CX is a modular design built in a controlled factory environment and transported to the mine in 14 shipping assemblies. The modularity of the 2650CX lends itself to quicker assembly and disassembly, as well as easier component installation and removal.”

PreVail Remote Health Monitoring provides timely machine health and performance knowledge. The system recognizes familiar patterns and deviations from normal control limits, and the operator can carry out the right actions at the right time to increase asset utilization, efficiency and production.

Together, LINCS II and PreVail use powerful communication, command, and control capabilities to transform data and information into refined knowledge for the operations and maintenance management teams. The information can be reported through key performance indicator dashboards, graphical analysis tools, and predictive modelling and reporting tools.

The company concludes: “While the P&H 2650CX Hybrid Shovel represents a new class of P&H shovels for the mining industry, utilising the latest in technology and innovation, it also leverages the legacy of our proven designs. With ongoing production underway and field support trained, we’re ready to see this machine’s success in the industry. Komatsu engineering brought together time-tested, proven technologies to develop something our customers were asking for in the P&H 2650CX Hybrid Shovel. With a payload capacity of 59 t (65 short tons) enabling a four-pass match to 227 t (250 short ton) haul trucks, it will accommodate trucks ranging from 135 to 360 t (150 to 400 short tons).”