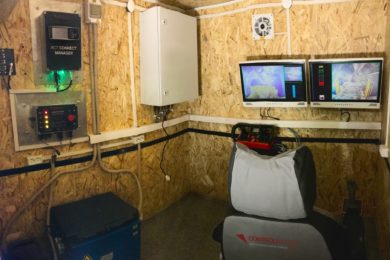 RCT says its ControlMaster® Teleremote solution has bested a competitive offering from a global original equipment manufacturer (OEM) on a project for an underground mine in Kazakhstan.

The company said ControlMaster was selected over the OEM’s technology option as it could be tailored to the Tishinsky mine’s specific requirements.

RCT worked with local Cat dealer Borusan Kazakhstan to install and commission the automation technology on two Cat R1700G underground loaders and associated Automation Centres located within the underground mine.

The ControlMaster Teleremote solution is now being used at the Tishinsky copper mine, in north-eastern Kazakhstan, part of the Ridder underground complex, owned by Kazzinc (majority owned by Glencore).

Going forward, RCT says it will manufacture the teleremote technology for an additional 12 Cat R1700G and Cat R1300G underground loaders, while Borusan Kazakhstan will install this equipment at the Tishinsky and Dolinnoye (also part of Ridder) mines.

The company has also supplied its new digital communications network, RCT Connect, and integrated it with the underground loaders.

RCT Connect, launched earlier this year, is designed specifically for autonomous and teleremote machine operations in underground mining environments and can provide low latency, consistent communications between command inputs from the mine’s surface and subsequent machine activities, according to RCT.

RCT’s Moscow-based Business Development Manager – CIS, Stephen Macarow, said he is pleased to have completed the project in partnership with Borusan Kazakhstan.

“Our teleremote solution means the operators will control the loaders from inside the Automation Centre and they will be protected from the hazardous conditions often found at the mine face including geotechnical risks, dust, exhaust fumes and temperatures as low as -27⁰C,” he said.

He added: “RCT has been supplying proven technological solutions to the mining industry in Kazakhstan and the broader CIS region for over 25 years and we look forward to providing more autonomous solutions in the future.”

A spokesperson for Borusan Kazakhstan said the company has been working with RCT since 2008 and in that time has delivered multiple automation projects for the Kazakhstan mining industry, including at the Tishinsky mine.

“Borusan Kazakhstan has been actively watching the regional mining market, and in cooperation with RCT has developed teleremote technology that is suitable for the CIS market,” the spokesperson said.