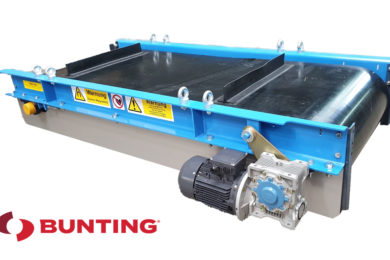 Bunting has released a new model Permanent Overband Magnet that, it says, is specifically developed for use on mobile plant such as crushers and screens used in mining, quarrying and recycling.

The PMax model is a lighter and more compact design that meets specific requirements of reduced maintenance time and lighter weights, it said. It has been released alongside the Easibelt Permanent Overband Magnet for recycling and bulk handling terminal applications. These models come on top of the classic PCB model in the Overband range.

The design of the Overband Magnet is simple with two pulleys mounted on a frame either side of a permanent magnetic block, according to Bunting. It is positioned above a conveyor, either over the head pulley, or more commonly across the belt. In operation, conveyed material passes under the Overband where the strong magnetic field attracts, lifts and then automatically discards tramp ferrous metal.

The PMax is 15% lighter than the standard PCB model across the range and 12% shorter in length, according to Bunting. These reductions result in a 14% higher magnetic force to weight ratio. It operates at a maximum working height of 300 mm (above the conveyor) on belts with widths between 600 and 1,500 mm.

The reduction in weight and size is achieved through adopting new manufacturing processes, including investing in new production plant, the company said. The new design release was in response to customer requests across Europe, it added.

Adrian Coleman, the General Manager of Bunting-Redditch, said: “Our PCB model has been an industry-standard for several decades and remains the optimum design for many applications. However, the PMax is specifically designed as a lower weight option for mobile plant, whilst the Easibelt offers significantly reduced maintenance time.”