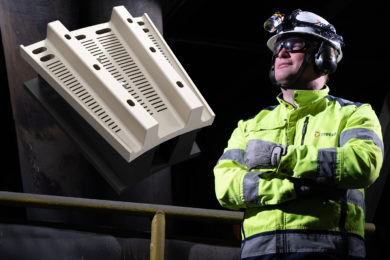 Metso has once again flexed its R&D muscles, launching a new and innovative product that, it says, can speed up and improve the safety of one of the trickiest and riskiest processes mill personnel carry out.

The Discharge End Megaliner builds on the Metso Megaliner™ concept the company introduced in 2012. Designed to reduce downtime by minimising the number of parts and people inside the mill during a relining process, the Megaliner has so far been installed in over 30 mills around the world.

A Megaliner element integrates multiple lifter and plate rows and has a minimum number of attachment points. Covering an area several times larger than conventional liners, these liners are light weight in relation to their size and, with threaded bushings, enable safer and faster relining processes to be conducted.

The initial 2012 Megaliner launch saw these lightweight liner parts developed for the mill shell. In 2015, Metso expanded the lining concept to the feed end of grinding mills. The company is now ready to tackle the tricky mill discharge end to complete the hat-trick.

“The shell represents the largest number of components to install so the potential for time savings for customers was large, hence why the Megaliner started there,” he told IM. “We have since extended to the feed end of the mill and now to the discharge end.”

The new product, which has been in the development pipeline for some time, according to Poutanen, is by no means just a bolt on to the existing Megaliner range.

“Even though the discharge section of the mill lining process is not as big from a volume perspective, the need for long bolts and a complex fixing arrangement in conventional installations makes it one of the most time-consuming and risky processes to carry out,” he said. “The Discharge End Megaliner is a highly valued addition to our Megaliner range as many of our customers struggle with the process.”

The conventional process Poutanen references here is worth spelling out.

With grate discharge mills – typically SAG, AG and ball mills – the conventional relining process at the discharge end usually involves removing the dischargers and grates, replacing with new lined versions and hammering in large, long bolts through the layers to secure the liner components.

“Even if modern recoilless hammers are used, it is still a challenge,” Poutanen said. “When the bolts become loose, they are hazardous and can potentially injure personnel.” In this process, personnel are also inside the mill – one of the most dangerous sections of the whole process plant.

On top of the large, long bolts, nuts are also required to fix the panels in place with conventional lining processes, adding up to multiple individual pieces and attachment points that must be fixed securely from inside the mill, Poutanen explained.

The Discharge End Megaliner, meanwhile, sees dischargers, grates and segments preassembled into one large unit. These are equipped with threaded bushings that are secured with “short bolts” from – very importantly – outside of the mill, he said.

This makes for an up to 50% faster lining installation using up to 70% fewer parts than the conventional process, according to Metso.

Poutanen says the new Discharge End Megaliner can be applied to any type of grate discharge mill – there is no prerequisite for Megaliner liners in the shell and feed end, for example – as long as there is a wide enough trunnion opening to remove and replace the liners, and a liner handler of sufficient capacity.

Metso is targeting the large end of the grinding mill market with this new development. The larger the mill, the greater the throughput, which has a direct impact on the costs associated with potential downtime caused by the relining process, Poutanen explained.

This has already been tested out at Boliden’s Aitik mine, in Gällivare, Sweden, which is currently undergoing an expansion to 45 Mt/y throughput.

The base metal mine already has Megaliner mill liners on the shell and feed end of both of its primary AG mills and has tested the new Discharge End Megaliner over nine months at one of these 38 ft (11.6 m) mills.

The Aitik trial has proven around 70% fewer parts are required compared with the conventional process. Relining has also been carried out much quicker and safer, according to Poutanen.

Similar to LHD operators being removed from the cab in order to remotely operate loaders in potentially unstable areas of underground mines, the ability to carry out the relining process from outside of the mill ‘danger zone’ could be considered an initial stage towards a fully automated relining process.

Poutanen agreed: “I think at some point, we will see a higher degree of automation. It is unlikely to be binary; it will be a gradual process.”

He said the combination of the Megaliner and Metso’s camera-based liner positioning system – which is offered to all Megaliner customers as an “add on” to the liner handling equipment – could help make the process more autonomous.

In order to be able to develop this kind of fully autonomous package, a close collaboration with customers and liner handler suppliers is required, he said. “I think we are still a few years away from having the process move to fully autonomous mode.”