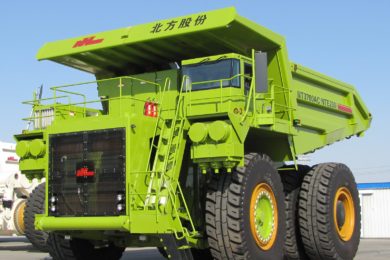 The fleet is to be used as part of an intelligent mine project of China’s State Power Investment Corporation (SPIC), a major national energy producer operating a number of coal mines including three 10 Mt/y open pit mines in Huolinhe, Inner Mongolia, namely the South Coal Mine, the North Coal Mine and the Zhahanur Coal Mine. SPIC has already trialled two retrofitted autonomous XEMC 108 t SF31904 dump trucks developed with Tage Idriver at its operations.

TAGE Idriver said the new unmanned mining fleet shows that the commercial application of its unmanned driving technology has reached a new level, and it also proves that the era of unmanned transportation in open-pit mines in China is coming. NHL is China’s largest mining truck manufacturer, with over 80% of the domestic market share; while TAGE Idriver is a leading company in the field of unmanned transportation systems in China’s mining industry. As early as July 2018, the two parties signed a strategic cooperation agreement, and in August of the same year, successfully completed a field test for the closed-loop operation of an unmanned mine truck. In 2019, TAGE Idriver then began cooperating further with NHL and they jointly developed a number of retrofitted unmanned mining units of 170 t class, which are now being used in the Baosteel Baiyun Obo iron ore mine. Currently, a fleet of four unmanned mining trucks are working with two electric shovels at the operation. For its part, NHL has also developed its own factory built NTE120AT 110 t autonomous mining truck.

TAGE Idriver and NHL say they are now jointly promoting the unmanned mining vehicles in open-pit mines and the acceleration of the construction of smart mines based on the principle of “complementary advantages, resource sharing, and common development.”