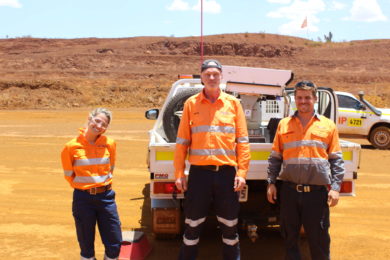 Australia-based Plotlogic and its artificial intelligence-based ore-characterisation technology has won admirers from both venture capital funds and the world’s biggest miner by market capitalisation.

The company announced this week that four of the world’s top artificial intelligence (AI) focused venture capital funds – Baidu Ventures, DCVC, 8VC, and Grids Capital – had invested in an over-subscribed angel round of funding for the company.

On top of this, Plotlogic confirmed it had signed its first contract to embed OreSense, its new AI ore characterisation technology, into an iron ore mine site of BHP’s in the Pilbara of Western Australia. This technology uses hyperspectral analysis and AI to optimise ore recovery on mine sites.

Precision mining with the help of technologies like OreSense have the potential to increase worldwide industry value by $370 billion/y, according to Plotlogic, while reducing carbon emissions and improving the sustainability of mines over their life cycle.

Founder and CEO, Andrew Job, said: “The mining industry is years behind other industries in utilising big data and AI: as a result, there is a lack of fast and accurate orebody knowledge that ultimately restricts yield. With our technology we can grade every tonne of ore accurately, before it even leaves the ground – driving efficiency, sustainability, and profitability. Plotlogic can optimise the mining process from pit-to-port with pinpoint precision.”

The team behind the technology, in addition to mining engineer Job, include Dr Richard Murphy, one of the world’s leading experts in hyperspectral geology, and Dr Michael Edgar, an experienced physicist and expert in optical sensors with experience spanning NASA and CalTech. Plotlogic has more than doubled its workforce since the start of the year, plans to double again before the end of the year, and once again next year, the company said.

Plotlogic said research collaborations with the University of Queensland’s Smart Machines Group and the Mineral Research Institute of Western Australia aided its quick establishment as a leader in real time high precision ore mapping and modelling.

Job said successful field trials with BHP’s iron ore and coal divisions, AngloGold Ashanti and Citic Pacific Mining over the past three years had provided valuable learnings that improved the technology and value proposition of OreSense across the iron ore, gold and coal sectors.

“Our technology has been purpose designed and built from the ground to best meet industry requirements,” he said.

On the BHP Iron Ore contract, Job said: “The opportunity to partner with the world’s biggest mining company is instrumental to our collaborative approach in the development and implementation of new technology for the mining industry.”