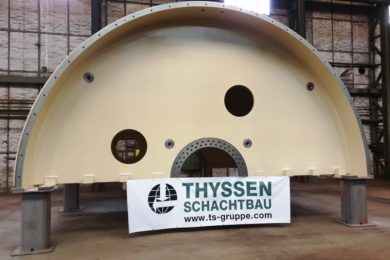 The first large components of two double drum production winders for Slavkaliy’s Nezhinsky potash mining complex in Belarus were recently completed by Thyssen Schachtbau subsidiary OLKO-Maschinentechnik GmbH. The first two halves of the double-drum Blair machines, which each has a diameter of 7 m and a width of 4.2 m, are now being packed for the journey to Belarus. More components will follow in the coming weeks and all the work is currently on schedule. The countershafts alone have a length of 13.2 m and an average diameter of approximately 1 m. The countershafts weigh 70 t.

The Nezhinsky mining and processing operation has four hoists. One of them will be used to lift people and cargo in a cage shaft. Another one will be used as a backup. The two main OLKO production winders are being installed in the skip shaft to extract the potash ore. The hoisting machines are being delivered to the construction site to be assembled on site. The project is being handled by Thyssen Schachtbau subsidiary OLKO-Maschinentechnik with the electrical component of the project being supplied by Siemens.