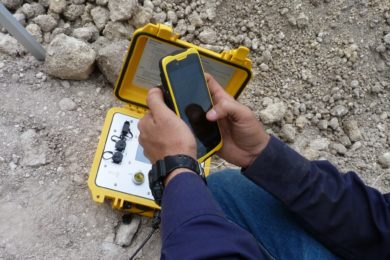 The AXXIS TITANIUM™ system, the latest generation of BME’s AXXIS™ blasting platform, is expected to be launched later this year as a successor to the company’s GII version. According to Tinus Brits, BME’s Global Product Manager for AXXIS, the latest product is certified for trials in terms of South Africa’s Authorised Recommended Process 1717 standard and is being field tested with the permission of the country’s Department of Mineral Resources.

“The upgraded system has achieved trial certification from the first phase of testing, receiving a six-month trial period confirming that it is safe to use,” Brits said. “Trials are now proceeding under the control of BME, so that we can build up a history of performance data – which, to date, has been faultless.”

He said the trials have been conducted on seven relatively small sites around the country since February 2020, using up to about 500 detonators per blast. These trials will continue as and when COVID-19 lockdown restrictions allow, BME said.

“After about six months of trials are completed, application can be made for final certification from the regulator,” he said. Trials were also likely to be extended to international locations as travel regulations open up, according to BME.

Andries Posthumus, Product Development Manager for AXXIS, said AXXIS TITANIUM’s functionality – with a three-in-one blasting box that can also be configured as a control box or as a repeater box – allows a larger number of boxes to be easily linked, as well as many more detonators. This improves efficiencies in blasting and saves time and cost for customers, Posthumus said.

“Even with this additional capacity, the system speeds up the logging process, while allowing on-bench logging and testing of up to 500 detonators,” Posthumus said.

The robust blasting box also benefits from even stronger shell technology, which is matched by tougher downhole cables, according to the company. In terms of digital data transfer and storage, the system’s NFC communication protocols allow faster wireless transfer of files between loggers, with data stored and managed in the cloud.