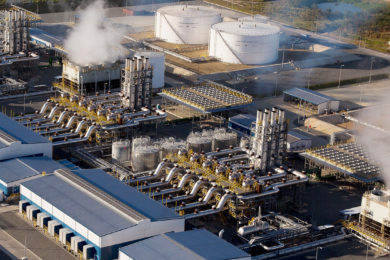 Barrick says in its just released Q1 2020 results that its clean energy strategy is playing a significant and growing part in reducing the impact of its operations on the environment. At the same time, it is also steadily reducing their cost profile.

Metallurgy, engineering and capital projects executive John Steele says the company is investing in cleaner energy projects across all its operations with the aim of cutting more than 1.5 Mt of CO2 per year from their GHG emissions. This marks a major advance in a journey that has taken Barrick and legacy company Randgold from diesel and coal through heavy fuel oil and then to natural gas, hydro electric and solar power.

The group’s second solar power plant is currently being installed at Loulo in Mali. When the 20 MW station is commissioned in September this year, it is expected to reduce diesel consumption by 10 million litres and CO2 emissions by 27,000 t per year.

Kibali in the DRC relies mainly on the hydropower generated by its three stations, but in a move to further reduce diesel consumption, a 9 MW battery has been installed to provide power surge capacity which is currently supplied by generators. This will reduce the need for thermal power top-ups at an estimated saving of 4.5 million litres of diesel and 8,000 t of CO2 per year. Despite its remote location, the inclusion of seasonal hydro power allows Kibali to deliver power at an annual average of 10 cents per kWh.

NGM has embarked on a project to replace the last of its coal-powered stations with natural gas to achieve an estimated annual CO2 saving of 650,000 t. Permit approval is expected in the fourth quarter of this year. NGM has also started a permitting process for a 200 MW solar plant. The 100 MW first phase of the project is expected to save 130,000 t of CO2 annually.

In the Dominican Republic, the Quisqueya 1 power plant has been converted to accept natural gas instead of heavy fuel oil. It is expected to cut Pueblo Viejo’s CO2 emissions by 260,000 t per year.

In Latin America, construction of the 23 km cross-Andes powerline, which will link Veladero in Argentina with the Chilean grid, is underway. Sustainable power from the Chilean grid — which globally has the largest percentage of renewable energy in its supply — will replace 25 MW of diesel-fired generation on site. This is expected to save 32 million litres of fuel per year, as well as the considerable cost of trucking it up the Andes, and cut CO2 emissions by 83,000 t.