Yangquan Coal completes installation of a 5G network at Xinyuan mine 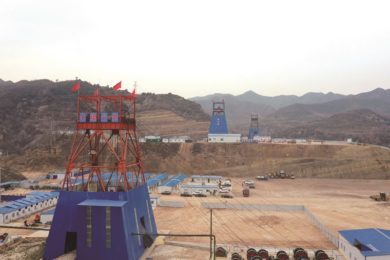 According to Chinese news agency Xinhua, the country’s largest hard coal producer Yangquan Coal Industry (Group) Co Ltd in Shanxi Province has finished building a 5G network in one of its mines, heralding the coming of the 5G era in the country’s coal industry and paving the way for intelligent mining based on 5G technologies. The report states that the 5G network in Yangquan’s subsidiary, Xinyuan, is the country’s first commercial 5G service to be completed under a coal mine shaft. It was built in partnership between China Mobile and Huawei.

Wang Haigang, Deputy Manager of Xinyuan, said the 5G network had been in stable operation for a week after its inauguration and optimisation. With the integrated 5G coverage, the data upload rate is above 800 Mbps and the transmission latency is less than 20 milliseconds in the mine, enabling a variety of applications such as high-definition audio and video communications and remote intelligent control of equipment to free up more workers from the dangerous working environment, according to Yu Beijian, Deputy General Manager of Yangquan Coal Industry Group.

Beijian said coal mines are usually hundreds of metres deep without telecom signals underground, and technicians have tackled technical problems to build the 5G network in the mine shaft which has complicated underground conditions.

With the 5G network in operation, the mine is expected to reduce its labour force in one underground working team from more than 170 to about 90 while maintaining the coal output, Haigang said, adding that Xinyuan hopes to increase the annual output from 3 Mt to 5 Mt.

Beijian said the company has planned to further enrich the 5G application scenarios with an aim to build a “smart mine” in the future. Yangquan Coal Industry Group is not alone in embracing the new technology. The report says China’s traditional coal mining companies are increasingly merging onto the 5G “expressway.”

As an example, Yankuang Group, a mining conglomerate in eastern China’s Shandong Province, has set up a joint project with China Unicom and Chinese telecom equipment maker ZTE to develop 5G and intelligent mining in areas including intelligent transportation and drone patrol.

Liu Feng, Vice-Chairman of the China National Coal Association, said that China now has more than 5,000 coal mines, which have built more than 200 intelligent mining platforms facilitated with automated equipment. The “new infrastructure” of the 5G networks being built in coal mines will lead to elevation in quality, efficiency and energy reform and greatly transform the traditional development mode in the coal industry, Feng said.