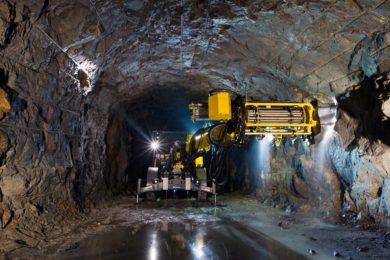 The United in Performance Award and Inspired by Innovation Award recognised close collaboration with a mining company that strengthened the customer’s productivity through automation, as well as the development of battery-electric equipment that brings multiple benefits to the mining industry, respectively.

The United in Performance Award, which honours exceptional customer collaboration, was presented to Olav Kvist and Per Holmberg of Epiroc’s Underground division and Johan Broström of the Technology & Digital division, as well as to mining company Boliden.

Epiroc explained: “Their extensive collaboration on automation has increased productivity significantly at two of Boliden’s mines in Sweden. For example, at the Garpenberg mine, the automated and teleremote operation of Epiroc’s Simba ME7 C production drill rig (pictured) has boosted drilling productivity by roughly 30%.”

The work is part of 6th Sense, Epiroc’s package of digital solutions that optimises customers’ processes, thereby strengthening their productivity and safety, the company said.

The Inspired by Innovation Award, which recognises Epiroc’s most innovative technical development that has become a proven commercial success, was presented to Anders Lindkvist, Patrik Roth, Markus Rantakeisu, Robert Lejonberg, Jan Fransson, Erik Svedlund and Fredrik Martinsson. The seven employees have been instrumental and represent a team of passionate people in developing Epiroc’s world-leading battery-electric mining equipment, the company said.

“The new generation battery-electric mining machines are the result of the team’s hard work and dedication in bringing significant benefits to customers including improved health and safety, lower total cost of operation and higher productivity,” Epiroc said. “The advantages are especially significant for underground operations where mining companies traditionally must invest heavily in ventilation to air out the diesel fumes.”

Helena Hedblom, Epiroc’s President and CEO, congratulated the winners, saying they are representative of “Epiroc’s innovative spirit and dedication to improving customers’ operations”.

She added: “We are proud to be on the forefront of automation, digitalisation and electrification as these technological shifts are making mining and infrastructure companies more productive, safe and environmentally friendly.”