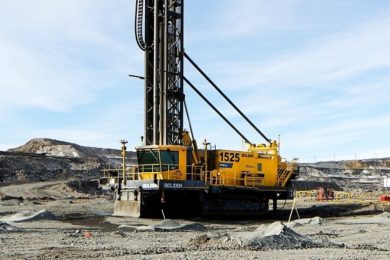 To help increase productivity, efficiency, and safety at its Aitik copper mine, in Sweden, Boliden has looked to leverage advances in autonomous drilling.

The mine has plans to raise production at the open-pit copper mine to 45 Mt/y this year, from 36 Mt/y previously.

To meet this target, Boliden needed to increase production from its fleet of five Epiroc Pit Vipers at the operation, the mining OEM said.

“The traditional and obvious solution would be to invest in additional Pit Vipers,” Epiroc said. Instead, Boliden looked to see if utilising automation and operating its fleet with teleremote, and semi-autonomous single-row Pit Vipers, could provide the needed boost.

“One reason to convert to remote and autonomous operations is the opportunity to reduce non-drilling time, increase utilisation and gain productivity,” Epiroc said.

Aitik is one of Europe’s largest mines with a massive pit visible from space, according to the equipment maker.

Peter Palo, Project Manager at Boliden Aitik, explained: “Its depth is 450 m and it has a width of several kilometres, requiring 15-20 minutes of driving time for operators to travel to and from the surface level. There is also a satellite mine even further away. Lunch breaks in production can last for an hour.”

Another factor taken into consideration is the harsh arctic winter climate, with snowstorms and biting cold that reduces visibility, and increases the need for safe workplace conditions. Both Boliden and Epiroc were curious to see whether automated Pit Vipers could handle these conditions, Epiroc remarked.

The first step in this transition was to perform a test with one of the Pit Vipers, converting and upgrading the machine for remote operation.

A meeting room in the mine office building was converted into a temporary control room, and the WLAN in the pit was updated and fortified to increase coverage and bandwidth.

Boliden staff were trained to operate the Pit Vipers by remote control, with the primary key performance indicators yielding positive results, according to Epiroc. On top of this, the Pit Viper automation technology received positive feedback from the operators.

Fredrik Lindström, Product Manager Automation at Epiroc, said: “There’s more to converting to automated operations than you’d think. To enjoy the full advantages of automation, you have to systematically change and improve routines, adapting them to the new processes. The lion’s share of the work involves getting people to change their habits to reach the common goal.

“Boliden has done a tremendous job laying the groundwork for the necessary process changes.”

The next step involved converting the other four Pit Vipers for remote operation while upgrading the first Pit Viper to handle single-row autonomous operation. The automation, in this case, entails the operator initiating the process, leaving the Pit Viper to drill a whole row of blast holes on its own and moving autonomously between drill holes. Once the row is completed, the operator moves and prepares the machine for the next row of holes.

Comparing the semi-autonomous single row Pit Viper with a fully manually operated machine, under optimal conditions, Boliden has measured a utilisation increase from 45-50% to 80%, as well as a 30% increase in productivity, Epiroc said.

Palo said: “We’re very pleased with the results, which is why we’re converting the rest of the Pit Viper fleet to remote operation as a step towards further automation.”

The operators handled the transition to remote operations exceptionally well, Epiroc said, explaining that the onsite operations control system was designed to mimic the Epiroc Pit Viper onboard controls with the same configuration.

Palo added: “We’ve been running by remote for a year now, and everyone is happy.

“Some of the operators were wary about learning to use the technology, but that settled quickly. They appreciate working together in a control room in the office building. It’s a better work environment, easier to exchange experiences and socialise.

“Handling the winter climate was also a cinch, despite heavy snowfalls and low temperatures for days on end. Even the laser-based Obstacle Detection System coped splendidly during snowfall. The automated systems seem to withstand arctic conditions very well.”