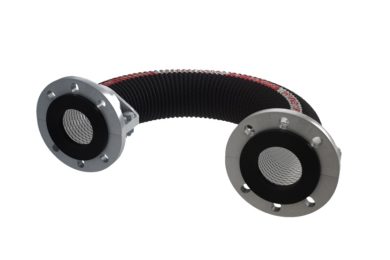 Trelleborg’s fluid handling operation is improving uptime at the world’s largest underground iron ore mine thanks to the installation of its Performer Ceramic hoses.

Standing up to harsh grinding and comminution processes at the operation – which IM believes to be the LKAB-owned Kiruna mine, in Sweden – the Performer Ceramic hoses are still performing after one year, significantly lengthening the quarterly maintenance cycle required for previous hoses, according to Trelleborg.

Ludovic Dumoulin, Market Segment Manager for Industrial Hoses within Trelleborg’s Fluid Handling Operation, said: “Keeping production at the extraordinary pace required in today’s mines means that each link in the processing chain has to be extraordinarily strong. The Performer Ceramic hose is like nothing else on the market. It offers extended life compared to rubber hoses and is 60% lighter than conventional ceramic hoses.

“The development process for the hose took four years and it is now proving it’s worth in real mining situations.”

Dumoulin said after one year of operation in the iron ore mine, Trelleborg engineers have confirmed that the mine’s Performer Ceramic hoses still have a lot of life in them yet – “at least another year-and-a-half before they need to be swapped out; 10 times longer than the quarterly average”, he said.

He concluded: “Cutting maintenance intervals from once a quarter for standard hoses to once a year with Performer Ceramic hoses can obviously have a dramatic effect on the cost efficiency of a mine, significantly lowering total cost of ownership.”

In addition, installation of the Performer Ceramic hose, used for hydraulic suction or discharge of highly abrasive material, is easier than competitor products, according to Trelleborg. The hose can be cut in the same way as an ordinary rubber hose without using a ceramic saw, while Bloc-End couplings provide simple fitment. Special diamond-shaped tiles have a bending radius tighter than a rubber hose at just 200 mm for a 50 mm hose and 1,300 mm for a 200 mm hose, which is roughly one-fifth of the space required by a conventional solution.

The Performer Ceramic hose patented design is 92% ceramic with an embedded steel helix. The operating temperature range is between -30°C and +70°C.