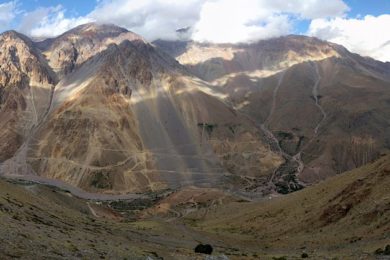 Los Andes Copper has ideas on adding to the number of large open-pit mines in Chile’s copper industry with the development of its Vizcachitas project, but it is eyeing up a different route to many of them that includes the use of energy-efficient HPGR technology and dry-stacked tailings.

In an update on its pending prefeasibility study (PFS), the company said it was re-evaluating the conceptual plan it laid out in its June 2019 preliminary economic assessment, which envisaged a base case 110,000 t/d operation using a SAG mill grinding circuit and thickened tailings dam.

The PFS is currently underway and areas of work being advanced include processing, the tailings facility, infrastructure, geology, the mine plan, environmental and social and community engagement, it said.

While delaying some of the metallurgical test work and field work, the current COVID-19 situation had not impacted the progress of the main engineering study, according to Los Andes. “All employees and subcontractors are working from home where possible and only a small group of individuals are working to prepare samples in the company’s Santiago core storage area,” it said.

The full PFS is not expected until the March quarter of 2021, but the company did outline some engineering leaps it has made since the PEA publication.

It said test work had shown that a HPGR circuit is feasible for the project and could provide “enhanced project economics with lower energy consumption and increased operating flexibility”.

The PEA outlined a SAG and ball mill crushing circuit with a target grind size of P80 (240 microns), but the more recent test work had shown room for an alternative with a three-stage crushing circuit using secondary crushers in open circuit and HPGR as a tertiary crusher in closed circuit. This circuit would target a grind size of P80 between 240-300 microns, the company said.

Such a change would avoid the use of a coarse ore stockpile, reduce energy consumption, reduce maintenance, and reduce the project footprint, it said.

Los Andes clarified: “HPGR technology has been identified as the most attractive grinding alternative given the data obtained from the preliminary test work conducted to date.”

The next big advance was made on the tailings side, with the company saying test work had shown that the project is amenable to filtering and dry-stacked tailings.

“This change would significantly reduce the project’s water consumption, footprint and environmental impact,” it said. It would also, one would expect, provide a much smoother environmental permitting route for Vizcachitas considering the negative sentiment surrounding thickened tailings dams in the industry.

There are knock-on benefits to this move too, with the reduced footprint required for dry-stacked tailings meaning all project infrastructure could fit into one operating complex in the Rocin Valley of Chile, around 150 km northeast of Santiago. The PEA previously outlined the use of infrastructure in both the Rocin Valley and the Chalaco Valley.

The preliminary filtration circuit Los Andes is working with shows the coarse fraction (87% of total tailings) could be filtered in belt filters, with the fine fraction (13%) filtered in pressure filters.

Recent studies on other dry-stack tailings project have tended to use either belt filters or pressure filters, but Los Andes said the combination of the two added flexibility to the tailings filtration operation at Vizcachitas and reduced operational risks due to variability of the finer fraction in tailings.

This would see the company require 12 belt filters and three filter presses for the 110,000 t/d copper-molybdenum operation.

According to the company, dry-stacked tailings would: