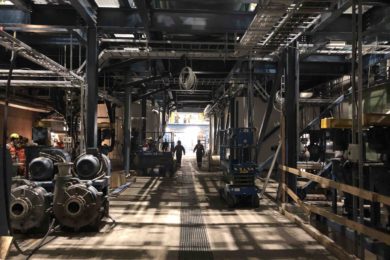 Sotkamo Silver is looking to reduce the amount of material it grinds and floats at its silver operation in Finland through the introduction of X-ray Transmission (XRT) ore sorting technology.

The company said it began pilot testing of the XRT machine in May after the unit was supplied and successfully commissioned at the mine by Outotec and TOMRA. Outotec and TOMRA have been cooperating on the supply of Outotec-branded sorting solutions for the mining and metallurgical industry since 2014.

Previous XRT ore sorting test work carried out by TOMRA on 2,200 kg of Sotkamo samples showed the silver content from low-grade ore increasing some 1.9 x to 116 g/t Ag, while the average silver content in ore rose 1.43 x to 195 g/t Ag. In addition to this, about 60% of the rock previously classified as low-grade ore was removed as gangue with the testing, with some 43% of rock reporting as gangue from the average grade ore samples.

Following this work, back in 2018, Sotkamo Silver said it was looking to install an Outotec-TOMRA XRT ore sorter in the process flowsheet after two-stage crushing (jaw and cone crushers) had taken place and the rock was some 30-70 mm in size.

In the update today, Sotkamo Silver said the XRT technology can scan every feed particle to identify the relative atomic density differences within particles and then separate desired high-grade particles from the barren material pneumatically.

It said sorting of marginal ore would be carried out after primary crushing and it was expected to reduce roughly 50% of non-ore material going into the grinding and flotation process.

“This improves significantly the energy efficiency as less material is grinded, and also material efficiency as marginal ore can be exploited and processed to mill feed,” the company said, adding that leftover barren material would be used as rock-fill in the underground mine.