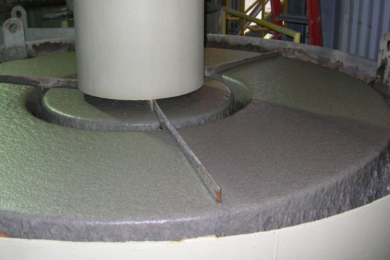 During its ‘Concentrating the Mine’ workshops held in 2015 and 2016, Anglo American first identified coarse particle recovery (CPR) as a key enabling technology. CPR is one of many significant breakthrough technology initiatives that has the potential to increase throughput and productivity, while simultaneously reducing environmental footprint, through rejection of coarse gangue (near-worthless waste material), dry stacking of sand waste, minimising the production of traditional tailings and reducing overall water consumption.

Following successful testing in the laboratory and at small pilot scale at Los Bronces, Anglo is now constructing a demonstration plant at the El Soldado copper mine, also in Chile, that will use the HydroFloat™ CPR technology from supplier Eriez’ Flotation Division in a new way. Here, a single 5 m diameter HydroFloat™ cell, the largest in the world, is to treat 100% of mill throughput, with the objective of proving the waste rejection process at full scale. Anglo American told IM that this CPR project at El Soldado is still in the construction and assembly stage, as due to the national contingency of COVID-19, a delay was generated on it. The plant is now expected to start up in Q1 2021.

Anglo’s Processing Development Lead, Adrian McDonald, explains: “Coarse particle recovery technology using the HydroFloat™ is not new; it’s been used in the phosphates and coal industries for many years. The difference with this application of HydroFloat™ is the way we handle coarser material prior to conventional flotation, and reject the gangue while it is in sand form.”

Anglo says its in-house-developed Fast Implementation of Technology (FIT) process, which forms part of the FutureSmart Mining™ technology pathway, has been instrumental in the development of CPR in treating sulphides. “FIT allows us to understand how best we can run parallel processes and models the latest development in mineralogical analyses in order to accelerate their commercial deployment. It leverages the learnings and outcomes of test work in one commodity to develop the application in other commodities.”

As McDonald points out: “CPR has the potential to be a breakthrough technology in the processing of sulphides. If we can prove the process at El Soldado, Anglo American will be the first company in the world to deploy CPR successfully to reject coarse gangue on a commercial scale. If that happens, it will change the way the mining industry approaches flotation. I hope that what we’re doing at El Soldado, as early adopters, will enable Anglo American to set new standards for base-metal concentrate processing and to become the industry leaders in dry stacking. That would give us significant competitive advantage.”